1 in 4 workers earns less than the legal minimum wage 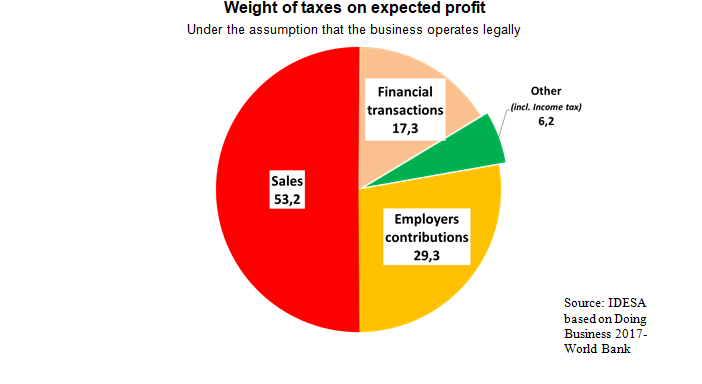 An agreement was not reached when discussing an update in the minimum legal wage. The problem is not the lack of consensus but the low level of productivity which makes the minimum wage an ineffective tool to fight poverty. Instead of insisting with sterile controversies, the Minimum Wage Council should address the modernization of labor and educational institutions.

The minimum legal wage is one of the labor regulations that attract most of the attention. It is associated to a more equal income distribution and poverty reduction. So much importance is attached to it, that it is established by the Constitution and a tripartite body is set for its update, called the Minimum Wage Council, with the participation of the government, employer representatives and unions. Due to high inflation, calling the council to update its amount annually is a repeated practice.

On this occasion, no agreement was reached, and the government decided to apply a 24% increase, gradually bringing the minimum legal wage from AR$8,060 to AR$10,000 per month on July 2018. The new legal minimum wage is rejected by unions deemed as insufficient. As a reference, with the increase, the legal minimum wage would barely cover 68% of the poverty line for a family of four (which INDEC estimates it at $14,666 per month) and its coverage will be much lower in July next year.

Would a higher minimum wage help with the goal of reducing poverty? In order to answer this question, it is appropriate to look at data from INDEC’s household survey. According to this source it can be seen that:

These data shows that, even with a legal minimum wage well below the poverty line, many workers are do not manage to generate equivalent or higher wages. Nearly 1 in 4 private workers earns less than the minimum legal wage. But the most suggestive evidence is that the great majority, 9 out of 10, are informal workers, either because their company refused to register them or because they are self-employed workers not meeting their tax and social security obligations.

This current situation shows that the problem is not originated in the lack of capacity to reach an agreement about the legal minimum wage, but, at the current level of productivity, the legal minimum wage is not a useful tool. Worse still, a more aggressive rise would likely increase labor informality enhancing its inability to reduce poverty,

The legal minimum wage weaknesses originate in Argentina’s productive and labor structure, which have prevailed for decades. The low income levels of many workers are linked to its low productivity. In most cases, they are small or single-person businesses that subsist because of informality in non-compliance with the rules (including the legal minimum wage). This reality is not going to be reversed by raising the legal threshold or by strengthening the controls to enforce it, but by changing public policy strategies.

Seeing the problem in this way, the Minimum Wage Council’s functions should migrate from its current role –discussing in an ineffectual way minimum salary levels– to address the policy agenda to support a sustainable process of increasing labor productivity. This agenda includes actions to multiply investments, increase education coverage and improve its quality and relevance for the labor market and, fundamentally simplify the labor law, reduce labor litigation and the burden of social charges on low wages.

Any consensus on these issues guarantees progress towards the goal of creating good jobs. This is the way to give people opportunities not only for them to leave poverty but to achieve sustainable progress based on their own effort.