﻿ In Brazil, Chile and Uruguay the dollar is dropping - IDESA

In Brazil, Chile and Uruguay the dollar is dropping 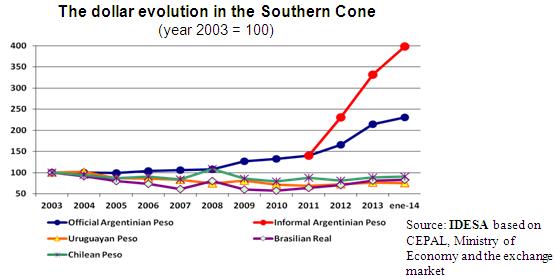 The rise of the dollar in the black market causes uncertainty and concerns. The main cause of the exchange rate instability is the accumulation of mistakes in the management of public expenditure. Redundant employment, the massive granting of pensions without contributions and subsidies to companies have generated a level of public spending that even the record tax burden is unable to finance. The deficit induces spurious emission that produces monetary inflation and leads people to buy dollars in the black market to protect their savings. With a more intelligent public expenditure management, neighboring countries have much more important concerns than the value of the dollar.

Many factors explain the phenomenon. The ruling class emphasizes, for example, that the summer season puts pressure on the foreign exchange market due to the increase of tourism.  However, this type of argument, as others with similar characteristics, is weak compared to the intensity and persistence of the phenomenon.

One way to show that deeper and structural factors are operating is to compare the situation of Argentina with its neighboring countries. In this regard, according to ECLAC, the Ministry of Economy and the foreign exchange market, the dollar in Argentina went from $2,9 to $6,8 between the end of 2003 and January 2014 in the official market (this means it increased 130%), while in the informal market it reached almost $12 (it increased 300%). In neighboring countries, for the same period, the results are the following:

These data shows that in the last decade neighboring countries in the southern cone have seen the dollar fall. This phenomenon is consistent with the exceptionally favorable international context. High commodity prices and historically low interest rates have caused a massive inflow of dollars to the region that tend to appreciate local currencies. Therefore, the strong devaluation experienced by Argentina, who also enjoys very beneficial external conditions, can only be explained by wrong internal policies that are radically different to the ones applied in neighboring countries.

The key feature that distinguishes Argentina is the poor quality in the management of its public spending. Tax burden is at a record high, reaching almost 40% of the Gross Domestic Product (GDP) when computing national, provincial and municipal taxation. However, public spending is nearly reaching 45% of GDP. This means that the consolidated public sector deficit if around 5%. This imbalance is financed mostly by printing money, generating a high inflation rate that induces people to buy dollars as a safe haven. The problem is aggravated by the fact that most of the growth in public spending is overspending. Illustrative testimonials are the subsidies in utilities, the increasing levels of insecurity, the setbacks in public education quality and the deficits of public companies.

Not placing as the main factor of the increase in the dollar  the irresponsible management of public spending is a gross error of diagnosis. This explains the successive failures that the authorities accumulate in the attempt to contain the dollar in the black market. For inflation and the dollar to stop being everyday problems, it is necessary to reduce redundant public employment, subsidies to unsustainable public companies, regressive subsidies to maintain artificially low fares in utilities, increase investment in infrastructure and energy, and to reorganize the pension system.

Neighboring democratic countries, with alternating and varied ideological approaches, manage their public sectors in a more intelligent manner. In this way, they profit from the international favorable conditions and instead of being burdened by inflation and the dollar in the black market, they have their agendas focused on much more relevant issues related to building a fairer, more progressive and more competitive society.