﻿ Less than 1 in 6 young people have formal employment - IDESA

Less than 1 in 6 young people have formal employment 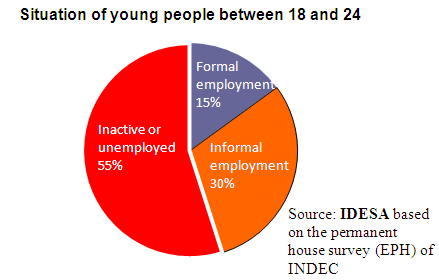 Due to the persistent drainage of reserves, authorities announced a new exchange rate policy together with a new social program, called “Progresar” which intends to alleviate the marginalization suffered by millions of young people.  Authorities are still unaware that exchange rate volatility is associated with excessive and badly managed public spending and that the only viable solution is a deep public sector transformation. Nevertheless, more alarming is the idea of inducing thousands of young people, in the beginning of their productive life, to become dependent on state paternalism.

The government has announced a new exchange rate policy. What is worrisome is that, apart from the large devaluation of the peso, there is no sign of new policies intended to tackle the increase in public spending and its poor management. On the contrary, along with new dispositions which partially relax the prohibition of purchasing dollars, a further increase in public spending was announced through Progresar.

The declared purpose of this initiative is to attack the problem of "ni-ni”, the name given to young people who neither work nor study. The Progresar aims to encourage young people between 18 and 24 years who do not work, or do so but earning less than the legal minimum wage (AR$3,600), to start studying through an average monthly transfer of AR$600. In order to obtain this assistance the beneficiaries need to demonstrate that they are studying in an institution recognized by the Ministry of Education or the Ministry of Labor. This subsidy will be focalized on poor families by requiring that parental income cannot exceed AR$3,600 per month.

According to household surveys performed by the INDEC, the country has about 4.5 million urban young people between 18 and 24 years. Their main characteristics are:

· 30% have a precarious job (unregistered job, self-employment, domestic or household service without salary) with an average gross salary of $ 1,850.

This official data shows that about half of young people are in a vulnerable situation, either because of low quality jobs or because they do not work or study. In contrast, less than 1 in 6 young people have formal salaried employment. Under these conditions, more important and urgent than to induce them to study is to promote the generation of good quality employment opportunities for young people between 18 and 24.

One of the weaknesses of the Progresar is that it does not contemplate the young people to work. This negative feature is demonstrated by the fact that the control of attendance to education will be held with the same tools as the with the Asignación Universal por Hijo (AUH), which involves a rustic and obsolete paper-back book. This instrument is highly bureaucratic and permeable to frauds which has allowed AUH to operate in practice as a mere uncondicioned income transfer. Applied on young people who are at the start of their productive life is a social danger. The Progresar, rather than stimulating to finishing studies adds incentives not to seek formal employment thus becoming a factor promoting perpetual dependence on state paternalism.

The problem of the "nn-ni" is serious and should be addressed urgently. The fact that there is no more room to increase public spending does not justify delaying the action to provide a solution. On the contrary, it increases the relevance of reducing the waste of public funds and being more creative in policy design. Rather than the risky extension of paternalism, the State's efforts should be focused on reducing bureaucratic obstacles and tax costs that discourage companies to create jobs for young people. A more dynamic youth labor market can be achieved, which will automatically will enhance the effectiveness of educational activities and work training.

Inducing the young, at the beginning of their productive life, to depend on paternalism is a strategic mistake with very negative implications. That ruling coalition and the opposition agreed on this policy, whether it is by opportunism and/or lack of ideas, it is much more disturbing than the improvisations that are committed by the authorities in their attempts to control the devaluation of the peso.