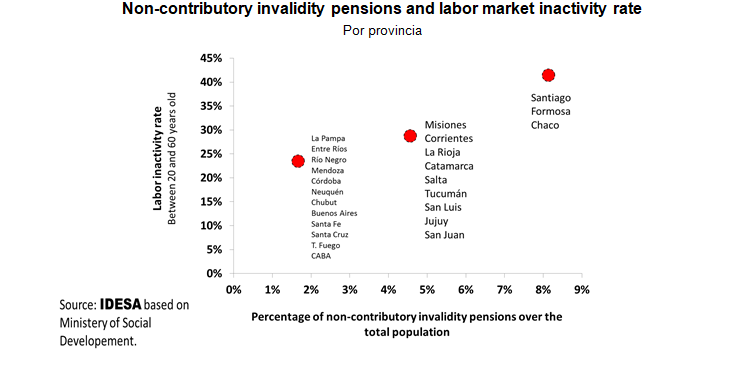 Given the evidence of irregularities in the massive allocation of non-contributory pensions, the government started a revision process that generated much controversy. When a pension is granted to someone who is not disabled, they are automatically condemned to a chronic dependency of welfare, since they are not allowed to work in the formal labor market. Instead of interrupting the revision, it should be continued accompanied by effective employment policies.

Non-contributory pensions for disabled are benefits granted to individuals who did not make contributions to the social security system, have a labor disability degree of 76% or more, and do not possess income or assets that allow the economic survival of their family group. They are granted at the National Ministry of Social Development, and an Official Medical Certificate issued by a state hospital professional is necessary to acquire them. They forbid formal employment, either salaried or self-employed.

Between 2000 and 2015 more than one million of these pensions were granted. Most of them were granted between 2009 and 2014, when they increased at a rate of 130 thousand per year. Currently, individuals subsidized with a non-contributory pension for labor disability represent 2.6% of the total population.

When considering the distribution of pensions by province, it is possible to asses their discretionary allocation and their impact on the labor market performance. Using information from the National Ministry of Social Development, it can be seen that:

These data confirms the suspicions about discretional management and fraud. Population is not so heterogeneous to justify such differences between provinces, where some have disability rates 4 times higher than the others. On the other hand, only a natural disaster or a war can explain that half of the provinces have 3% to 8% of the population handicapped, taking into account that there are more individuals with labor market disabilities which are those receiving contributory pensions. In the absence of any of these factors, it is clear that disability pensions, like many other welfare programs, were administered in a rudimentary manner and with little respect for the rules.

Additionally, this data shows a close connection between the share of the population that receives a disability pension and the incidence of labor market inactivity. This is to say that, the higher the rate of non-contributory disability pensions, the higher the rate of labor market inactivity. This reveals that the intention was to benefit with the discretionary distribution of pensions those regions where labor activity rate is lower. But the reality is that this action contributed to perpetuation of poverty and lack of social development. By granting a non-contributory disability pensions to persons who are capable of working, apart from it being illegal, they become perpetually condemned to be poor since they are not able to join the formal labor market. Thus the government promoted illegality and chronic dependence on welfare.  Surely this strategy generated electoral benefits to politicians, but it was at the expense of social backwardness and the loss of people’s dignity.

The review process of pensions should not be interrupted. As a first step, it is fundamental to distinguish situations and, then, sketch the necessary policies. For those individuals who are not disabled but are socially vulnerable, it is necessary to provide other programs that allow them to access to a job, be it salaried or self-employed. For those who suffer a disability, the government needs to rethink the rules and verification process in order to allow a reasonable evaluation of their socio-economic situation.