2 out of 3 new poor were generated in the Conurbano

The 2020 lockdown generated a sharp increase in poverty, highly concentrated in the Conurbano area. This is a strong caveat of the unfeasibility of a second lockdown. But, above all, it warns of the political risks underlying in the wider poverty gaps between the Conurbano and the rest of the country. 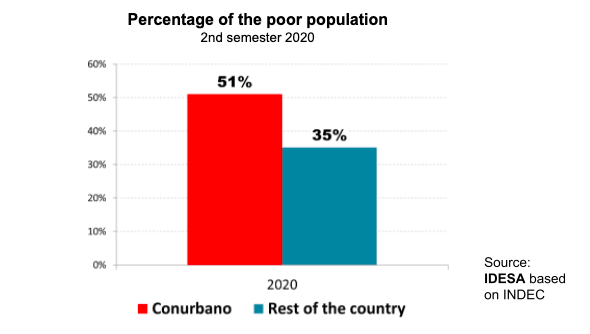 Hopes for Covid-19 vaccination are being tempered by a number of factors. This is related to the lack of organizational capacity for the procurement, logistics, and supply of vaccines in their correct doses to people. In international comparison, Argentina stands out for its slow vaccination process. Concerns are heightened by the fact that countries that have achieved mass vaccinations, such as England and Chile, are not exempt from mass infection. This shows that vaccines can mitigate the effects of the disease but not prevent it.

In this context, the Covid second wave is emerging in Argentina. The expansion of the disease at a rate of 12,000 cases per day is approaching October’s peak of 15,000 cases per day. Therefore, the possibility of returning to another lockdown is being analyzed.

Particularly, in the Conurbano area in the Buenos Aires ciy’s outskirts, where high population density and weak health structure prevail.

Is it feasible to confine the population again? The latest INDEC data on poverty help to answer this question. According to this source, in the country’s large urban agglomerates, between the second half of 2019 and the same period of 2020 it is observed that:

These data show a strong geographical concentration of the social damage produced by the 2020 lockdown. The Conurbano concentrated 2 out of every 3 new poor people generated by the lockdown. This has led to an increase in the differences in poverty incidence between the Conurbano and the rest of the country. The INDEC reports that for urban agglomerates, poverty reaches 42% of the population. But this average hides that, while poverty in the country’s urban agglomerates averages 35%, in the Conurbano it is 51% of the population.

Sanitary confinement deepened structural problems. In particular, it magnified poverty in the high concentration of poor and vulnerable families in the Conurbano. In this deteriorated area, trying to lockdown people again to contain the pandemic is a very risky strategy. With insufficient vaccines and unsustainable confinements, the only thing left to do is to appeal to the population’s responsibility to comply with the preventive measures of distancing, masks and hands cleaning.

This dramatic dilemma between health and socio-economic care in the Conurbano is dire. But the deepening fragmentation in this region has not only ethical but also political connotations. For some, the massive and profound marginalization of the Conurbano is an opportunity to accumulate votes to impose a populist project throughout the country. On the other side, no less risky are the voices starting to propose some independentist experiments in the rest of the country. The Conurbano has long been a complex challenge to resolve, but never as decisive as today.

Lockdown is a sanitary measure intrinsically impoverishing. In advanced countries, access to cheap credit allows them to take compensatory measures, while testing and vaccinations multiply. The case of the Province of Buenos Aires is paradigmatic of the opposite. The provincial state was unwilling to restructure its external debt (as other provinces did) and defaulted. The main consequence is that, beyond the preferential treatment it receives from the federal government, there is no financial or managerial capacity to compensate for the damages of a new confinement.