﻿ 2 out of 3 pensions were granted with special rules - IDESA ﻿

2 out of 3 pensions were granted with special rules

The so-called “privilege” pensions were one of the most controversial issues in the discussion of the Social Solidarity and Productive Reactivation Law. This is one more evidence that the pension system requires a comprehensive regulation which should be made jointly by the Nation and the provinces. When dealing with the pension emergency, there was a […] 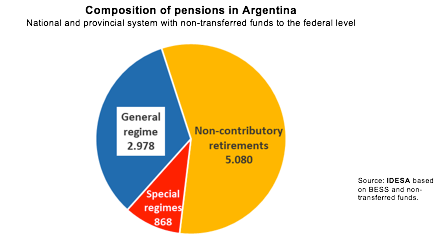 When dealing with the pension emergency, there was a misunderstanding about the special pension regimes. With the official proposal to suspend the application of the indexation formula to all pensioners, the legislators demanded that the special regimes be exempted. After agitated discussion, a special commission was created to propose the Congress what to do with the pension indexation of the special regimes in 180 days. After the incident, the President of the Nation declared that “privilege pensions” should be eliminated.

The special regimes establish more beneficial pension rules than the general ones for certain groups of workers. These are access requirements and/or calculation of initial benefit and/or more advantageous indexation rules. At the national level, special regimes are contemplated for judges, politicians, diplomats, teachers, scientists, utilities, the Rio Turbio company, and security forces. At the provincial level, public employees also enjoy more beneficial rules than the general national regime.

What is the importance of these special regimes? According to data from the Secretariat of Social Security and the provincial funds that have not been transferred to the federal level, it can be seen that

These data show that, of the almost 9 million current pensioners, approximately 10% obtained their benefit through a special regime. That is to say, more generous pension rules than the general ones. Additionally, the majority of the pensioners also obtained their benefit without the total contributions required by the general regime. In conclusion, 2 out of every 3 pensions have been delivered with different rules to the general regime.

The exception as the norm demonstrates the degradation and the need for comprehensive reform in the social security system. The temporary suspension of indexation or the review of the most abusive special regimes (such as those for judges, politicians, and diplomats because of their high benefits) are important issues. Still, they are far from the only ones. In order to give equity and sustainability to the pension system, a more comprehensive approach is needed tending to unify it.

The general regime should cover most of the people. Exceptions to compensate for premature aging should be scientifically justified, and that specific activity should bear the increased costs of early retirement. A strict actuarial calculation avoiding hidden subsidies is key. Similarly, if any group of workers thinks they deserve higher benefits than those of the general scheme, they should manage the difference with supplementary plans administered independently from the State and actuarially consistent.

The social security system is another challenge that requires joint work between the federal and the provincial governments. The same is true in other strategic issues, such as tax regulation and the management of the public sector. In the provinces, the typical groups of special regimes prevail (teachers, health, security, judges, etc.), so it is highly relevant to build common strategies. Other factors that erode sustainability –such as the massification of double coverage derived from the accumulation of a retirement and survival pension– are also common issues since they often arise from the combination of a national with a provincial benefit.