The Vice-President, who is already in retirement, was granted a pension by the Judiciary as a former president’s widow. Having benefits without contributions and doubling benefits is not an exception but the rule in the pension system. Making the system sustainable and equitable requires changing these regulations. 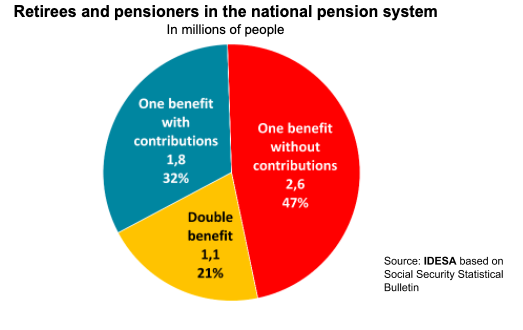 The current Vice President of the Nation was authorized by the Justice to receive two pension benefits. One is a pension for the widowhood of a former president, and the other is a pension for having been president. As it is a privileged regime, the sum up of both benefits will make her receive approximately AR$2 million monthly, with retroactive plus the advantage of not paying income tax. Additionally, the court ruling leaves the precedent open for her to claim a third privileged retirement when she leaves her current vice president position.

The case caused public anger because a judge decided to rule in favor of an abusive and grotesque claim by the current vice-president. But beyond this specific case, from the point of view of the pension system’s sustainability and equity, it is important to evaluate to what extent the pension rules allow access to pension benefits without making contributions and duplicating benefits. In other words, how exceptional is the vice president’s case?

According to the Social Security Statistical Bulletin, there are 5.5 million retirees and pensioners in the national system, of which

These data show that 2 out of 3 retirees and pensioners obtained their pension benefit without contributions or are receiving multiple benefits. In other words, accessing pension benefits without having made contributions previously and doubling benefits is not the exception but the rule in the pension system. Certainly, the amounts involved in the Vice-President’s case are particularly irritating. But much more serious is the fact that the laws and jurisprudence support the massification of this type of distortion.

The pension system was in crisis before the COVID. In 2019 the National Treasury had to transfer 1.4% of GDP to the ANSES (the national pension agency) to cover imbalances. Part of the problem is the deterioration of the labor market, where high rates of labor inactivity, unemployment, informality, and low wages prevail. But the burden of the deficit emerges from the very lax and concessionary benefit rules. Proof of this is that pension expenditure in terms of GDP in Argentina is higher than in countries with a higher ratio of elders.

The agenda to order the pension system has four pillars. The first is to eliminate the special regimes, i.e., all people should retire under the same conditions. In some cases, the reform should be instant, such as the privileged regime for the president and vice-president. In others, the reform must consider a transition or should address complementary capitalization regimes. The second pillar is to close the moratoriums and improve the Universal Pension for the Elderly (PUAM) as a tool for protecting people who reach retirement age without contributions. The third is to eliminate the survivor’s pension in order to avoid the multiple benefits since, with the PUAM, all persons will be guaranteed income protection at the age of retirement. The fourth pillar is to link the retirement age to demographic aging.

It is suggestive that while the Judiciary endorsed the Vice President’s claim for two privileged benefits, Congress approved the change in the indexing formula. Beyond the heated debates, the new formula is not going to solve the sustainability or equity problems of the pension system. However, the Judicial sentence will aggravate them by legitimizing the right to access two benefits to a person who did not make prior contributions. This degradation of the pension system increases the urgency for a pension reform.