24,000 deaths and 1,5 millón poor people could have been avoided

Mismanagement of the pandemic led to neglect of the economy and health. Chile and Uruguay suffer fewer deaths and less poverty than Argentina. This is the consequence of Argentina’s long tradition of improvisation and lack of professionalism in the management of the public sector. 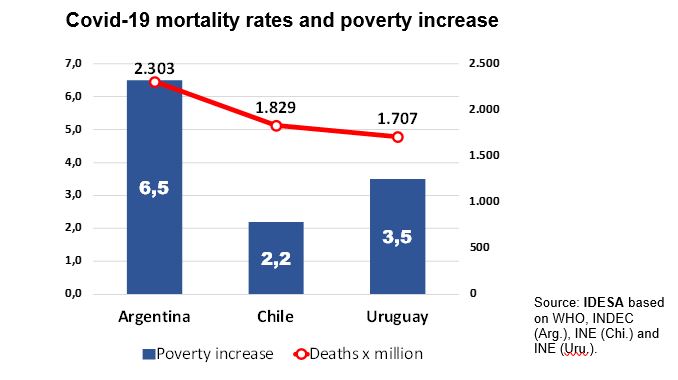 The pandemic posed unprecedented challenges. In this process of learning by doing, countries committed many mistakes. Nevertheless, evidence shows that there are great differences among countries in terms of protecting the population’s health and in minimizing the economic and social damage caused by the isolation measures.

Many factors explain the differences in performances, but a key one is the quality of the public sector management. In this sense, in the Southern Cone there are interesting experiences. On one side is Chile where the role of the state is more subsidiary compared with the market in the economic and social organization. On the other is Uruguay, which had to manage the pandemic during a transition of government from almost 15 years of left-wing to a more right-wing government and is a country with a long tradition of more preeminence of the state. These experiences are useful to answer some questions to the passionate debate in Argentina about the size and the role of the state.

The question is how important is the size or depth of state intervention in comparison with the quality of its management. Based on data from the WHO and the statistical offices of each country, it can be seen that:

These data show that the pandemic had much stronger negative impacts in Argentina in both issues: health and economic. Argentina suffered more deaths from Covid and a greater increase in poverty than its neighbors did. Chile and Uruguay, with very different conceptions of the role of the state, had quite similar and better results. Had Argentina achieved the performance of its neighbors, it would have had approximately 24,000 fewer Covid deaths and 1.5 million fewer poor people. The explanation is that both Chile and Uruguay have better public sector management.

Improvisation and lack of professionalism are at the roots of the Argentine public sector’s poor performance. On one hand, is the chronic decision to spend always in excess of available resources. This leads to very high inflation and excessive indebtedness that ends in periodic defaults. Chile and Uruguay, thanks to a more prudent fiscal management, faced the pandemic with access to credit and single-digit interest rates. On the other hand, is the systematic degradation of public sector management. Chile and Uruguay showed a better capacity to manage health policies and those aimed at compensating citizens for the confinement.

Improvisation and lack of professionalism continued to be the rule during the pandemic. A group of experts was formed outside state agencies which promoted an absolute containment for the whole country for 7 months through successive extensions every 3 weeks. Very rudimentary instruments were used to distribute economic aid, with pathetic situations such as crowding the people to deliver the aid as a means of a political campaign. Public agencies were paralyzed because their obsolete bureaucracy could not work remotely. The vaccination process is loaded with deficiencies. Chile and Uruguay, despite many mistakes, have half of the population fully vaccinated, while in Argentina this proportion does not reach 20%.

The failure in the management of the pandemic is not due because health was prioritized over the economy. Nor is it because the state is big or small. The failure in the pandemic is the consequence of the improvisation and lack of professionalism that has always characterized the design of public policies and the management of the State in Argentina.