85% of pensioners have other income

The pension reform in Cordoba updated the regulations on survivor’s pensions. If this innovation were replicated at the national level, ANSES sustainability could be improved. This type of policy alleviates the fiscal burden and exemplifies how to avoid the debt default and help initiate a process of economic growth. 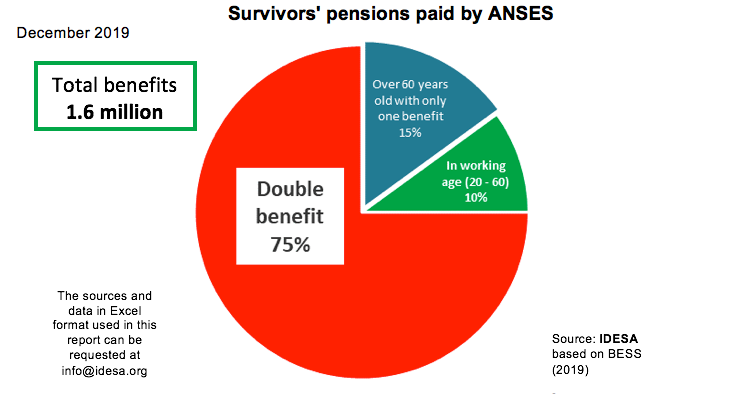 The national government keeps struggling for an agreement with external creditors to reschedule the dollar-denominated public debt. Based on sustainability, Argentina’s position is that the country cannot promise more than it has offered (grace period until the end of 2022, a sharp drop in interest rates, and beginning of capital payment in 2026). Creditors, for their part, consider the offer as an unacceptable economic loss. A credible plan for a reform of the public sector in order to generate fiscal resources for the repayment may help to reconcile the two positions.

Behind the ordering of the public sector, a priority is to fix the social security system since it represents almost half of the public expenditure. It is urgent to define a new formula of indexation, given that the courts do not tolerate discretionary increases. However, there are also more structural issues that must be reviewed because they are sources of inequity and public money squandering. One of the most relevant is the rule of the survivor’s pension. That is, the pension granted to the spouse when a retirement holder dies.

The nature and order of magnitude of the problem can be drawn from some numbers. According to the Social Security Statistical Bulletin, as of December 2019, of the 1.6 million survivor’s pensions paid out by the ANSES (the national pension administration):

These data show that survivors’ pensions have lost the role for which they were created. Of the total number of pensions, 85% goes to a person with an additional income, which can be from employment, since the person is at working age, or has her own retirement. More duplication would be found if other pension schemes, other than ANSES, are considered as the provincial pension funds, professionals, and the army.

The survivor’s pension is a clear example of how the lack of updates in the rules erodes the sustainability and equity of the pension system. This benefit was designed a century ago under the assumption that the man was the sole breadwinner and the woman confined to domestic activities. With the increase in female labor participation and the open access to retirements without contributions thanks to moratoriums, nowadays almost all older adults access to a pension. Thus, when a retirement holder dies and leaves a survivor’s pension, it generates a double coverage with high probability. Proof of this is that, in recent years, 90% of the growth in survivor’s pensions was double coverage. On the other size, when a child is entitled to a survivor’s pension, it ends at 18 years old. This rule is also out-dated given that, unlike the past, young people tend to prolong their economic dependence by continuing higher education.

Córdoba province addressed this problem in its provincial scheme. Firstly, it established a solidarity contribution of 20% to those who have more than one pension or have another source of income exceeding a certain threshold (6 minimum pensions). In the case of the children’s pension, it was extended to the age of 23, conditioned to keep studying. These are pension adaptations aimed at gaining sustainability and improving equity.

Addressing a comprehensive public-sector reform is the way to avoid the default. It is also decisive to overcome the crisis and start economic growth. If this type of innovation on the survivor’s pension were extended to the rest of the pension systems, especially the national scheme administered by ANSES, progress could be made towards more sustainability with equity in the Argentine pension system.