A quarter of the moratoria generares double benefit

The decision to extend the moratoria (pension without contributions) for three more years shows that the consequences of poor decisions in the pension system continue to be underestimated. While long-term strategies are proposed (such as the commercial deal with the EU), in the social security prevails opportunism. In 2005, using an Emergency Decree, an old […] 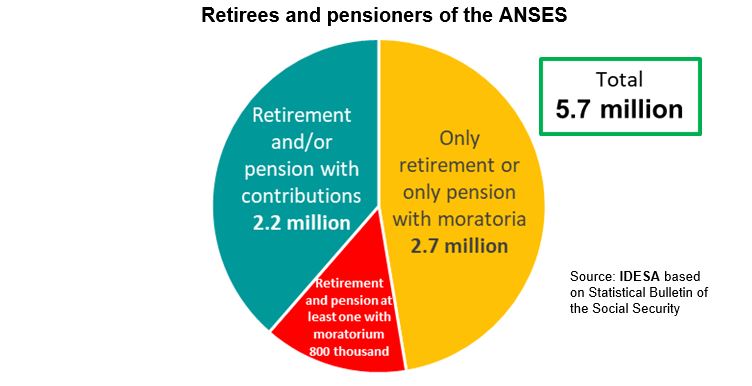 In 2016, when the 2-year term of the last moratorium expired, the Universal Pension for the Elderly (PUAM in Spanish) was established with sound judgment. This benefit consists of a pension equivalent to 80% of the minimum retirement for people of any sex who reach 65 years without contributions and with no other social benefit. For women who were in the transition between 60 and 65 years of age, it was decided to extend the term of the moratorium that expired in that year for 3 more years. In this way, in 2019 moratoriums were supposed to be extinguished and definitively replaced by PUAM. However, within days of the expiration, an administrative resolution of the ANSES extended the term of expiry of the moratorium for 3 more years again, taking it to 2022.

The protection of older adults who did not make contributions in their active life is standard in well-organized countries. But only Argentina it is done by forcing the person to simulate having worked as an unregistered self-employed to access a retirement. This means that the 5.7 million retirees and pensioners of the ANSES are integrated by:

These data show the enormous impact of the moratoriums. It indeed served to protect many people who reach old age without means, but it is also proven that people of medium and high income appropriated a high proportion of these benefits. One of the most inequitable facets of the moratoriums is that people who have another pension benefit is enjoying almost a quarter of these retirements. Thus, those who used the moratoriums to obtain a double benefit from the ANSES receive an amount similar to those who made contributions regularly.
In addition to the negative impact on equity, the moratoriums are the main factor of fiscal instability. The payment of the 3.5 million benefits granted to people without contributions generates public spending equivalent to 2.7% of GDP. If instead of improvising with such a rudimentary scheme as the moratorium, they would have appealed to a scheme of non-contributory benefits focused on older adults without means, the serious fiscal problems that the country faces today would have been avoided. The enormous external indebtedness, the high inflation, and the deep recession could have been averted with more professional and responsible management of the pension system.
The previous government indeed made the main mistakes and their costs will be a burden until the middle of the century. In any case, opportunism in the management of social security continues to prevail when its consequences are visible in terms of public debt, inflation, and recession due to the fiscal imbalances it generates. Even advances such as the creation of the PUAM are blurred by decisions such as the one established in the Budget Law 2019 that prohibits its access to people with work. It is very contradictory to be restrictive with a welfare benefit such as PUAM and flexible with a much more onerous mechanism such as the pensions granted with the moratoria.Strengthening links with the European Union is an opportunity for progress. But to take advantage of it, macroeconomic stability is essential. This is not possible if the pension system continues to be administered with such a short-term and electoral vision that undermines fiscal sustainability.