﻿ A second lockdown in unfeasible - IDESA

A second lockdown in unfeasible

Faced with the exponential growth of contagions and the lack of vaccines, the alternative of a second lockdown looms. But neither public finances, nor the labor market, nor the psychology of the people can withstand a new confinement. It is more humane to avoid social paralysis and appeal to people’s responsibility 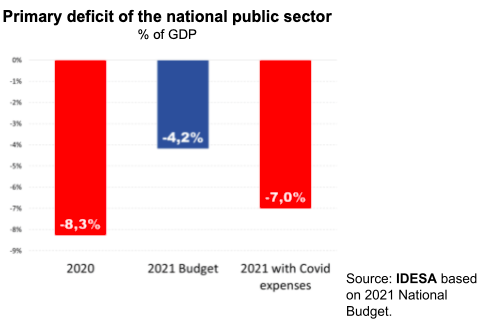 Covid-19 infections have a dizzying increase. In just one week, the number of new infections doubled from 12,000 to 24,000 cases per day, surpassing the maximum recorded last year. This led the national government to take a series of measures, including restrictions on mobility. Hopes are pinned on vaccination. However, due to vaccines’ insufficient availability, it was decided to place a single dose. The experience of Chile and Uruguay is showing that administering a single dose, even on a massive scale, does not prevent contagion.

The situation leads to evaluate the possibility of returning to a second lockdown. From the point of view of national public finances, the extraordinary expenses incurred to alleviate the confinement last year were about U$S 2,5 billion in ATP (subsidies to the formal salary), another U$S 2,5 billion in IFE (subsidies to the informal sector) and another U$S 5,0 billion in subsidies for the health sector, food programs, and the provinces. Thus, Covid extra spending can be roughly estimated at U$S 10 billion.

Assuming that a new confinement will cause a similar level of spending as last year, that is, assuming optimistically that it is not adjusted for inflation, what would happen to the public finances? According to the 2021 National Budget it can be forecasted that:

These data show that, even under optimistic assumptions, the implementation of strict lockdown would generate a sharp increase in the fiscal imbalance. Given that the national government has very limited access to capital markets, it has no alternative but to print more money. Approximately this would imply a 40% increase in the monetary base, i.e., the amount of bills issued by the Central Bank. Such a money expansion in a context of an inflation already at 4% monthly would be dangerously destabilizing.

To the inflationary risks must be added the precarious labor and emotional conditions. There are still 1 million people who lost their jobs from the first lockdown (300 thousand formal and 700 thousand informal). The growth of poverty was high and concentrated in the Conurbano (surroundings of Buenos Aires), where the focus of the contagion is. On the emotional side, INDEC recently pointed out that 56% of the adults who responded to the household survey stated that they had experienced increases in anxiety due to confinement, of which half of them did not have labor problems. In other words, confinement is not only a question of money.

With the exponential growth of contagions, few vaccines, the public sector imbalanced, the labor market deteriorated, poverty at extreme levels and the emotional stability of people disturbed, it is highly advisable to discard a lockdown as an alternative. It is necessary to appeal to people’s responsibility. For this, the authorities must assume more empathetic attitudes with the population. Less confrontation and insults, focus on priorities, and give good examples by avoiding unnecessary meetings. In particular, the massive protest agglomerations of social organizations subsidized by the State.