﻿ A single national health system is not the solution - IDESA

A single national health system is not the solution

There is no doubt that the health system needs to be reformed. But the direction is not to a single national health system. The reason is that the competencies in health belong to the provinces. For this reason, the most direct way to improve the health system’s efficiency and equity is to tend towards decentralization. 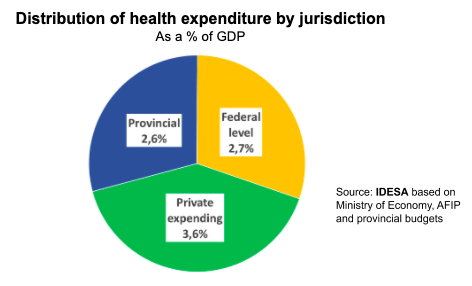 The Vice President’s statements questioning the current shape of the health system generated controversy and uncertainty. Specifically, she criticized the three subsystems’ fragmented coexistence: the public, the social security, and the private subsystems. She went on saying that an integrated national health system should be thought of, in which services are unified for more efficient and equitable use of resources.

Around the world, health systems are organized in different ways. There are countries with universal public systems (such as England and Spain) where people access health care through public hospitals. In other countries, social security prevails, which would be Argentina’s social security system (such as Germany and the Netherlands). Some countries have predominantly private health systems (such as the United States). Other countries have, like Argentina, combinations of these three typologies.

Unfortunately, there is no official systematized information about the resources of Argentina’s health system. But taking alternative official sources, some estimates can be obtained. Based on these sources, it is estimated that approximately:

These data confirm the description put forward by the Vice President. In Argentina, the three types of health system organizations coexist, and the resources are managed, more or less, equally. With many disarticulations and multiple coverages, this coexistence does generate inefficiencies and waste. In this perspective, the Vice President’s proposal is not new. Most health experts in Argentina (health doctors, health economists, sociologists, political scientists, etc.) share this diagnosis.

On the other side, the federal level has jurisdiction over the unions-managed sickness funds, PAMI, and private health insurers. The latter administers part of the resources of the social security system and part of the families’ private expenditure. Labor unions assume the sickness funds resources as their own, not as those of their members. The PAMI has always been managed obscurely and unloaded patients on the provincial public hospitals for free. Private health insurers provide health care to middle- and high-income people. In this context, it is difficult to find any interest among the system’s stakeholders in favor of unification.

The health system needs to be reformed. But not in the direction of a single national system. Neither the institutional conditions (provincial competencies) nor the interests of the main actors (labor unions, PAMI, private health insurers) favor unification. More conducive is to establish rules that induce efficiency and transparency and tend towards greater decentralization of today’s federal functions towards the provinces. In the end, provinces are responsible for public health. This process could begin by transferring to the provinces the coverage of PAMI members of their jurisdiction.