﻿ Bondholders should not be paid more, the state should be ordered instead - IDESA

Bondholders should not be paid more, the state should be ordered instead

With low acceptance in the public debt swap, there is pressure on the government to increase payment offers to bondholders to avoid default. Instead of continuing to mortgage the future, creditors need to be convinced that fiscal solvency will be recovered with a public sector restructuring plan. 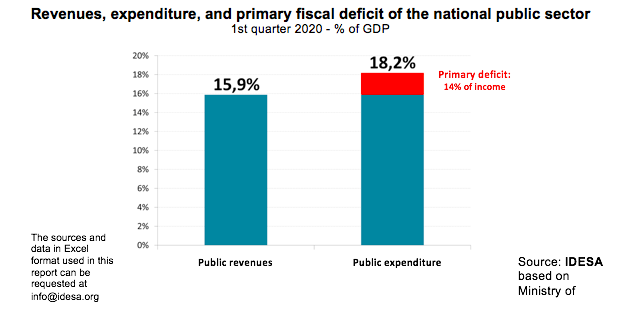 The Argentine government’s proposal to swap its public debt in dollars was supported by 138 international economists, many of whom renowned in the academic world, including Nobel Prize winners. Another 174 Argentine peers did the same. Thus, from an academic point of view, the Argentine public debt swap proposal had strong support.

The academics’ letter of support states that Argentina has made a responsible offer to its creditors, given its ability to pay. The Argentine offer proposes a three-year grace period, a small reduction in capital, and a significant downsizing in interest payments. Furthermore, to reinforce the argument, it is mentioned that the IMF pointed out the need for private creditors to make a significant contribution in restoring debt sustainability. Academics see the opportunity for the international financial community to resolve a sovereign debt crisis orderly.

However, most external creditors rejected Argentina’s offer. How may it be explained such a divergence in views? Beyond the fact that one part opines from the academia and the other “from the wallet”, public finances show another reason. According to data from the Ministry of Economy as of the first quarter of 2020, it can be seen that:

These data show a large imbalance between income and expenditure. This is not an exception, but rather a secular tendency of the Argentine public sector to systematically spend over its resources. The stagnation of the economy –unlike other countries where fiscal relaxation is a transitory palliative against the pandemic– in Argentina aggravates the chronic fiscal deficit that has been going on for decades.

Both academics and creditors are right. Academics are when they say that Argentina’s offer is at the limit of what it can pay, given its dire fiscal situation. Creditors are right when they require increases in payments since Argentina is a chronic, high-risk debtor with no vocation for ordering its public finances. The counterexample is the debt restructuring that Uruguay implemented in 2002. The success was not achieved through great commitments but by sincere, credible, and consistent proposals for public sector reorganization. Thus, the international financial community agreed to reschedule Uruguay’s public debt. The result is that Uruguay was able to grow, honor its debt, and, most important of all, promote a sustained process of growth with social inclusion.

Creditors look not only at how much Argentina is offering to pay, but also assess the probability to comply. As the government does not show any vocation to fix a dysfunctional public sector, the risks of new defaults are very high. That is why the proposal is rejected. The problem is not that the offer is meager, but its low credibility. In this context, it is a mistake to pressure the government for a more generous offer. It may avoid a new and repetitive default, but the problems will remain and emerge in the future.

Both academics who support the official proposal and those who propose to improve the offer would make a much more useful contribution to the country if they pressed for a public sector modernization. With a credible plan for tax, social security, and functional organization of the State, it would be easier to achieve acceptance of the debt swap. More importantly, an well-managed public sector will generate the conditions to launch a sustained process of economic growth with social inclusion.