﻿ Capital income tax is not high in Argentina - IDESA

Capital income tax is not high in Argentina

The project to increase corporate income tax is criticized because it is said that it will scare off investment. Compared to other countries, the high tax burden is not due to corporate income tax but to employers’ contributions. The way to lower them is not as the president announced. 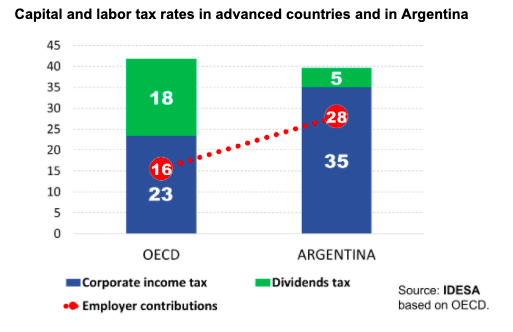 Until 2020, corporate income tax in Argentina was 30% plus 5% taxation on shareholder dividends. This means that the total tax burden on capital was 35%. From 2021 onwards, the companies’ share of the tax will be lowered to 25%, while the shareholders’ share will be raised to 10%. This reform, promoted by the previous government, sought to increase incentives to invest profits while keeping the total tax burden on income from capital at 35%.

The current government now proposes raising the corporate income tax to 35% and reducing the tax on dividends to 5%. This raises the total tax burden on income from capital to 40%. By increasing the tax burden on companies, the change reduces incentives to reinvest profits. Analysts and business advisors vehemently assert that this increase in capital tax will further scare away companies’ already few intentions to invest in Argentina.

An objective assessment can be made by comparing the tax burden in developed countries, both on capital (income tax) and labor (employer’s contributions), with that of Argentina. According to OECD data, it can be seen that:

These data show three key points. First, the level of total tax on income from capital in Argentina, after the reform is passed, will not very different from that in advanced countries. Second, developed countries are keener to tax dividends than corporate profits to encourage reinvestment. Third, the main distortion is not the tax on capital but on labor. Employer contributions in Argentina are much higher than in developed countries.

These features of tax policy must be assessed in the context of the severe employment problems in Argentina. Since the beginning of 2018, when the recession began, 500,000 registered salaried jobs in private companies have been lost (300,000 with the exchange rate crisis, 200,000 with the pandemic). The median formal wage as of December 2020 was $54,000, which is the same amount that, according to INDEC, a typical family needs to avoid poverty. This implies that half of the wages are not enough to lift a typical family out of poverty.

The president’s announcement to reduce employer contributions for northern Argentina provinces is consistent with the evidence. However, it is a good intention reduced to mere cosmetics. Employer contributions in these provinces are to be lowered only for employers who increase their staff, with a reduction schedule of 70% in the first year of hiring, 45% in the second year, and 20% in the third (additional 10 percentage points for women). Given the complexity and limited nature of the proposed scheme, its insignificance is guaranteed.

Reversing the economic decline requires more structural measures. The programme to reduce employers’ contributions should be much bolder by applying non-taxable minimums to all companies’ wage bills. In this way, the benefit is focused on the smallest enterprises. To attract investment, more critical than lowering income tax is to pay a lot more attention to hard infrastructure (energy and communications) and soft infrastructure (good labor and product market regulations, and an efficient and independent judiciary).