﻿ Changing the indexation rule does not solve the pensions disorder - IDESA

Changing the indexation rule does not solve the pensions disorder

Pension expenditure is growing steadily due to aging and poor pension policies. Changes in the indexation rule do not solve this problem. What is needed is a comprehensive reform of the pension rules in order to give them sustainability with more equity. 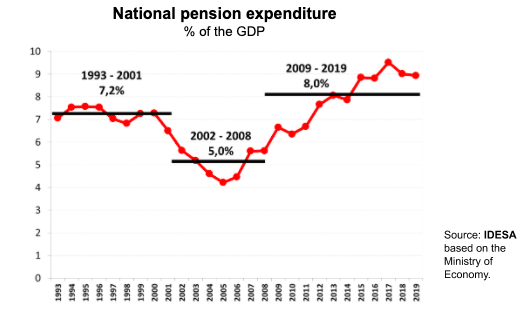 The National Congress is preparing to sanction a new law on pensions’ indexation. From the current rule –suspended– which establishes that adjustments to pensions will be 70% inflation and 30% wages, it is proposed to return to the previous formula which adjusted 50% according to wages and 50% according to ANSES tax resources with a ceiling of increase in total resources plus 3%. Whether this is better or worse for retirees will depend on whether the total pension system’s revenues rise above or below inflation.

It is surprising that the previous government modified the formula to be re-established because it increases the pension spending above revenues. This is why the formula was changed in favor of inflation. Now, with the argument of devolving sustainability, it returns to the old formula, changed because it was not sustainable.

Can the indexation rule guarantee the pension system sustainability? To answer this question, it is useful to analyze the evolution of the national pension expenditure. According to data from the Ministry of the Economy, it can be seen that:

These data show that pension expenditure does not depend on the indexation rule. It is true that by manipulating the increases, it is possible to devalue the pension expenditure in real terms, as occurred between 2002 and 2008 and to a lesser extent this year. But it implies deferring the problems because it generates a high level of judicial litigation. More decisive in the dynamics of pension expenditure are aging and poor pension policies. One of the most important is the moratorium through which 3.6 million contributory pensions have been distributed without contributions. One result of this wrong decision is the growing incidence of people receiving double benefits (retirement plus pension).

The system sustainability will not be achieved by changing the indexing rule. Instead, comprehensive reform is needed addressing five key points. The first is to equalize the requirements for access to the general scheme set at 65 years of age and 30 years of contribution. The second is to adjust these requirements with the population aging gradually. The third is to close the moratoriums and leave for those who reach retirement age without contributions, the Universal Pension for the Elderly (PUAM). The fourth is to limit the possibility of accumulating benefits (retirement plus pension). The fifth is to harmonize all the special schemes with the general system.

Social security policy generates changes in roles among the political class. When politicians are in the opposition, they assume a resistant attitude to any change in the pension system. When they are in government, they justify the indexation rule manipulation trying to limit the unsustainable growth in pension expenditure generated by bad rules. While this change of roles is being executed with great plasticity, these same actors are firmly promoting –almost as a high state policy– reform immobility toward a better pension system organization.

The social security system is the institutional device that compromises children’s and youngsters’ future the most. This is because the effects of its decisions last for decades, and the new generations are the ones who must pay the costs of these decisions. A country with more than 60% of children and youngsters in poverty cannot afford to have a generous and messy pension system with many privileges.