Once again, the price of the dollar generates anxiety. The country’s low export capacity and the people’s refusal to save in pesos due to high inflation explain the lack of dollars. The solution is a comprehensive State reform to eradicate inflation and improve the quality of public administration. 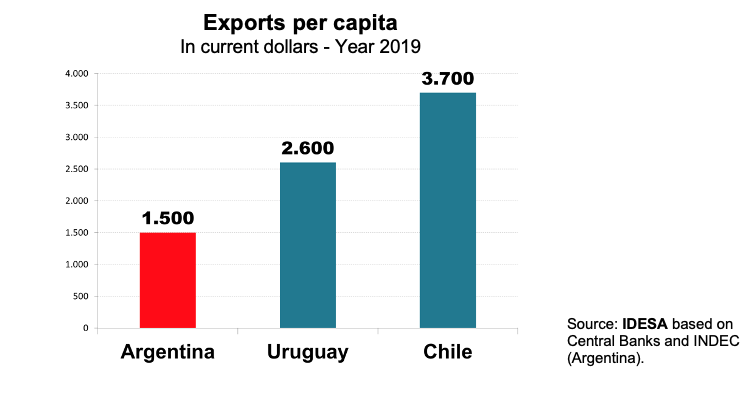 The foreign exchange market is convulsed. In August, the Central Bank had to sell U$S 950 million and $ S $ S 1,600 million more in September. Given this tendency of depleting reserves, the monetary authority decided to tighten restrictions to buy official dollars. Furthermore, export taxes were reduced temporarily to encourage exporters to sell foreign currency to the Central Bank. So far in October, the Central Bank has still lost another U$S 400 million. Meanwhile, the black market dollar accelerated, reaching $167, thus generating a 100% gap with the official exchange rate. This volatility increases fears of imminent official dollar devaluation with a high impact on inflation.

Certainly, a large part of the problem lies in the rampant monetary issuing taking place since the new government took office. In the first months of 2020, monetary expansion was justified by the need to alleviate the critical social situation inherited. As of April, the justification was the fight against the pandemic. In any case, since the beginning of the new administration, pesos in people’s hands doubled, while the dollar reserves in the Central Bank remained practically constant.

Beyond these short-term factors, it is worth asking why the dollar instability is a recurrent issue in Argentina. One way to shed some light on the answers is by comparing the region’s exports. In this regard, data from central banks and the INDEC for Argentina show that in 2019:

These data show that Argentina has a very low export capacity. Uruguay exports in relative terms 70% more, and Chile more than double Argentina’s per capita export level. This export lag is one of the central factors explaining Argentina’s external restriction. Thus a vicious circle sets out. Argentina’s relatively low level of exports means that the dollars needed to import machines, inputs, and spare parts to export more are insufficient. In other words, the country needs to expand exports to obtain more dollars, but the dollar insufficiency is what restrains export expansion.

Additionally, Argentines demand more dollars than Chileans and Uruguayans. Since the Argentine State has a chronic and structural fiscal imbalance, high inflation is endemic. This leads Argentines to despise their national currency and appeal to the dollar as a refuge from inflation. In this way, the scarcity of foreign currency due to the productive sector’s insufficient capacity to produce dollars is aggravated for the population over-demand of dollars to protect their savings against inflation.

In this context, the exchange rate policy can provide palliatives. But they are not enough to roll out a vast amount of productive resources to increase export capacity, nor to break with the deep-rooted culture of Argentines saving in dollars. Therefore, beyond the necessary, urgent, and short-term measures, it is essential to formulate a plan for a comprehensive reform of the public sector to recover fiscal sustainability and raise public administration quality.

The State reform must have four pillars: social security ordering, tax ordering, functional ordering, and federal ordering. In social security, it is essential to eliminate special treatments and double coverage. In the tax system, it is vital to unify taxes for collecting more with less tax pressure. The functional ordering implies eliminating overlapping State departments, especially the federal government’s programs and bureaucratic structures that interfere with provincial functions. In federalism, co-participation must be eliminated, and the provinces must be allowed to generate their own resources. These are disruptive changes that collide with many inertias and interests. For this reason, it is essential to be aware that proposals that avoid making progress on these issues are mere expressions of desire without the capacity to provide long-term solutions.