﻿ Dollar increased the double than prices and salaries - IDESA

Dollar increased the double than prices and salaries

In recent months there have been some corrections in the external and fiscal deficits. However, the process is complicated due to worsening social tensions and weakening tax collection. Lowering public spending more sustainably will ease the transition to a more stable economy and this will permit to resume growth. The economic crisis shows no sign […] 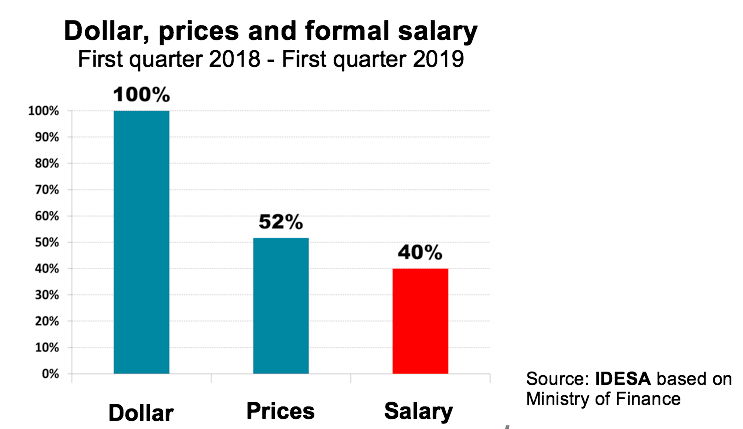 The economic crisis shows no sign of loosening. On the one hand, although the official data is not yet available, it is presumed that inflation in March would have been between 3.5% and 4%, which implies that only in the first three months of 2019 inflation would already exceed 10%. On the level of activity side, the pieces of evidence are less precise. Although there are sectors with clear improvements, such as agriculture, in general, the recession continues. Evidence in this direction is that the federal tax collection has been growing below 40% year-on-year when inflation exceeds 50%.

Decomposing the tax collection by type of tribute, there are apparent indications of the changes that are taking place in the economy. Taxes directly linked to domestic economic activity (VAT-DGI, Income Tax-DGI and Check Tax) grew by 43%, salary contributions to the social security system did so by 29% and taxes linked to imports (VAT-Customs, Income Tax-Customs and import duties) grew by only 11% year-on-year.

These data show that there was a radical change in relative prices. The dollar rose twice the average consumer prices. In turn, consumer prices grew high above wages. This increase in the exchange rate above prices and wages quickly impacted imports. Since September 2018, when the dollar exceeded AR$40, imports of goods have been decreasing at a rate of 25% year-on-year, explaining the low performance of taxes linked to imports. In the same sense, the growth of wages below inflation is what explains why social security contributions have increased less than inflation.

The new structure of relative prices generated relief on the external imbalance. But it did so with a reduction in imports that originates fundamentally in the fall of economic activity. A shrinking economy generates social tensions due to the lack of salaried job creation and real wages deterioration. On the fiscal imbalance side, the weakness in the growth of tax collection generates concerns. Facing this situation, the International Monetary Fund (IMF) and many local economic pundits raise the question of the need to strengthen state revenues. However, there are limited spaces to increase revenues without adding tension to the economic activity and the already tense social situation.

The alternative is to implement policies giving sustainability to the reduction of public spending. In this regard, instead of sharpening the electoral confrontation, consensus should be reached to resolve the pension system imbalances. The agreement should deal with sensitive issues such as leveling out the retirement age, closing the duplication of coverage that produces the survivor’s pension archaic rule, review the inflation adjustment rule when a person receives more than one pension and permanently close the moratorias (the possibility to get a retirement without the need of contributions). In the same logic, public spending can be reduced and efficiency gained by eliminating federal programs of education, health, social development, housing and urban planning which are overlapped with provincial and municipal spending.

With concrete signs in favor of reducing public spending sustainably, the needed confidence will be generated in order to lower the interest rate and reactivate the economy without reigniting inflation. On the contrary, with shortcuts, such as price controls or exchange rate appreciation, some electoral dividends can be obtained, in the best of the cases, but external and fiscal imbalances will be re-established, deepening the economic and social crisis.