Employment recovery will come through informality

The pandemic deepened old labor problems. Those who suffered the most were informal workers. With greater flexibility in people’s mobility, some of these jobs are recovering. But the secular trend of not generating good quality jobs continues. 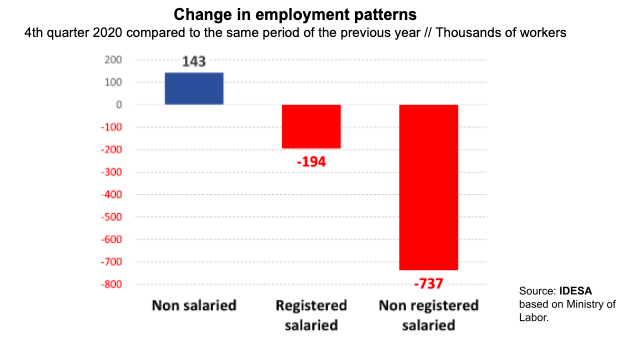 The pandemic hit the countries of the western world with virulence. One particular feature in Argentina is that the economic fall –INDEC estimated it at 10%– was stronger than in most countries. The other particularity, even more important, is that this abrupt paralysis was the continuity of the recession that started in 2018, which, in turn, is linked to a long process of economic, labor, and social decline.

Thus, the Argentine labor market ends with a negative year. The Ministry of Labor estimates that in the 4th quarter of 2020, with respect to the same period of the previous year, there are 500 thousand more people who went into labor inactivity (neither working nor looking for job) and another 300 thousand more people who declare themselves unemployed (do not have a job but are actively looking for one). Thus the pandemic accumulates a balance of 800 thousand people who lost their jobs.

This drop in employment has different nuances in its composition. According to the same official source –the Ministry of Labor– between the 4th quarter of 2020 and the same period of the previous year, it is observed that:

These data show that the adjustment in the labor market was concentrated in unregistered salaried employment. Measures to preserve employment, such as the layoffs prohibition –which is still in force–, wage subsidies –the ATPs– and other provisions adopted in collective bargaining were relatively successful in the formal sector. But they had no impact on unregistered salaried workers. Given that informal employment is widespread among vulnerable households, the collapse of this type of employment explains to a large extent the sharp increase in poverty.

The recovery of the economy is triggering the retrieval of informal employment. This can already be observed in the last quarter of the year compared with the two previous quarters of tighter lockdowns. This recovery of informal employment consolidates an already strongly segmented labor market in Argentina. Less than half of the employment is a registered salaried job (of which one-third is public employment), while the other more than half is unregistered salaried and self-employment (most of which is also informal).

The fact that few working-age people have access to formal employment has negative impacts. It expels many families to vulnerability and adds severe difficulties in financing the social protection system. It weakens the social security financing, which is the main destabilizing factor of the public finances. In the social security health system, the lack of funding has led to an extreme and risky situation such as a strike declaration by health workers in the middle of the pandemic due to private hospitals’ lack of resources.

A labor market with more people in labor inactivity, unemployment, and informality also puts democracy at risk. Under this condition, a growing number of households are structurally dependent on welfare. This is a severe limitation to vote with judgment freedom. The greater the labor deficits, the more fertile the field is for demagogic and opportunistic politicians manipulating people on the basis of their essential needs.