UNESCO published the results of an educational evaluation of primary school students in Latin America. The level of degradation of Argentine education is frustrating. It is impossible to reverse this process as long as the focus remains on the federal government. The provinces are responsible for this service. 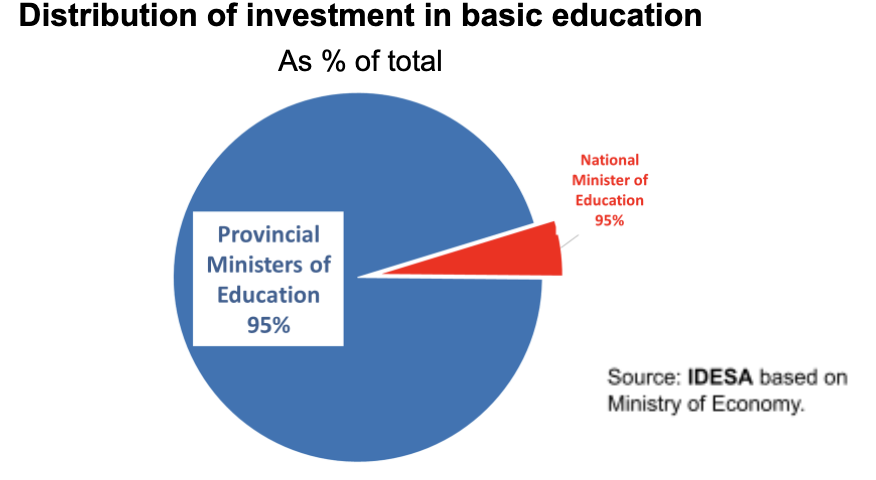 The results of UNESCO’s ERCE 2019 educational assessment are available. This assessment is applied to children in the 3rd and 6th grades of primary school in 16 Latin American countries. Taking children in 6th grade in Argentina, 68% do not reach minimum performance levels in reading, 87% do not do so in mathematics and 86% do not do so in science. The results are very poor even in the Latin American context.

The evaluation was done in 2019 so that this group of children entered high school in 2020 with huge learning deficits. On top of this situation, the prolonged closure of schools due to the pandemic can be expected to deepen the deficits. Already in 2018, the PISA tests showed that 60% of young Argentines in secondary school do not reach the minimum performance levels in reading, mathematics, and science. In 2022, a new PISA test will be conducted to assess the group evaluated in ERCE. Only catastrophic results can be expected.

National officials put forward as the main explanation for such a failure the reduction in national spending on basic education promoted by the previous government. To evaluate objectively this statement, it is useful to look at the official data. According to the Ministry of Economy, in 2019 it is observed that:

These data show that almost the entire education budget is financed and administered by the provinces. The incidence of federal interventions is irrelevant even in 2015 when the previous government had not yet taken office. This is not a failure. The national Constitution establishes in its Article 5°: “Each province shall dictate for itself a Constitution (…) that ensures its administration of justice, its municipal regime, and primary education”. In the national Constitution, primary education is understood as basic education. Then, attributing the reasons for the failure of basic education to the national government is a gross and widespread misdiagnosis.

Many factors explain the deterioration of education, but the most important is the poor management of the provinces. Education is the main component of provincial budgets and 90% of it goes to salaries. The problem is that they are administered in an archaic manner rewarding mediocrity. Educators who are committed to their students do not receive any recognition. This bad practice is repeated even with the “National Teacher Incentive Fund” which represents more than half of the national spending on basic education but only 7% of teachers’ salaries. This additional in the wage is the same for all, without recognizing whether the teacher is in front of the classroom or on indefinite leave or working with poor children who have more complex learning deficits.

The solution begins by transforming the current national ministry into an educational accreditation and evaluation agency. It would be an agency specialized in the homogenization of titles and curricular contents and periodic evaluations of student learning and teacher competencies in the provinces. The main role of the national government in education is to generate and disseminate evidence so that provincial governments feel the pressure to improve their management. The current national resources for basic education –such as the “National Teacher Incentive Fund”– should be transferred to the provinces and closed. It is key to assume that national programs only serve to justify bureaucracy and dilute responsibilities.

The UNESCO report concludes that the region is far from achieving the Sustainable Development Goal (SDG) 2030. Argentina is among the non-compliant countries. The country will not get out of the crisis by proclaiming voluntarist and unproductive goals. To reverse the situation, it is necessary to address a comprehensive reorganization of the education system focused on the idea that the responsibilities belong to the provinces.