Five tmes less foreign investment than in Chile and Uruguay

The call to the president of the opposition bloc in the Senate to integrate the electoral formula of the ruling party had a good impact on financial markets. It is a strong signal that if this alliance can advance with structural reforms, Argentina could emerge from its long decadence. The election of the head of […] 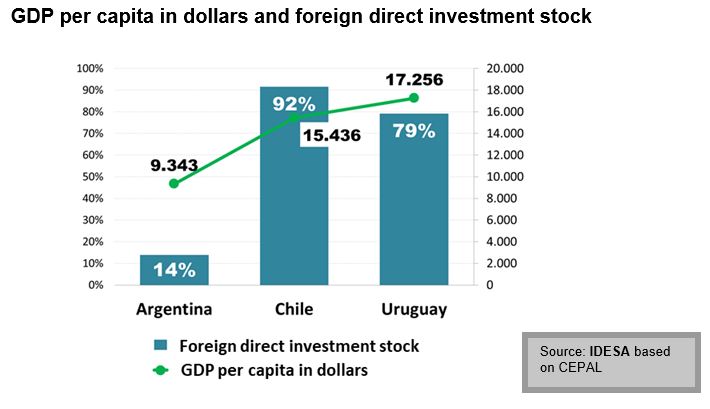 The election of the head of the opposition bloc in the Senate as a candidate for vice president by the ruling party formula for the upcoming voting caused an abrupt change in the perception of local and international investors regarding Argentina. The announcement made the MERVAL index that measures the evolution of the shares in the Buenos Aires Stock Exchange rose by 10%, and the increase in the demand for Argentine government bonds abroad made the country risk fall 8%.

The now candidate for vice president was emphatic in sustaining when he declared his acceptance to accompany the current president in the new formula, that Argentina to prosper needs to strengthen its capitalism. This clear statement about the development strategy, together with the well-known negotiating ability of the candidates to articulate political consensus, poses a different scenario for the future of the country.

How important is the investors’ confidence, especially those in the international arena? One way to measure it is by analyzing the association between foreign direct investment and the Gross Domestic Product (GDP) in dollars. According to ECLAC in the countries of the Southern Cone, the following trends can be observed:

These data show that there is a high association between per capita income and the stock of foreign direct investment. The reasons are varied. In general, foreign investment tends to incorporate better technologies and good practices than the local one. But most important is that it reflects how attractive and friendly the country is for economic investment, both national and foreign. The fact that Argentina has 5 times less foreign direct investment than Chile and Uruguay is the result of its disdain for the rules of capitalism. In other words, the poorer quality of institutions results in less social progress.

In order to attract foreign direct investment, it is essential to reform the public sector. That is, the public sector should offer high quality infrastructure and services, good market regulations, and be financially balanced so as not to generate inflation. For this to happen, it is key to eliminate overlapping taxes and functions between the three levels of government (national, provincial, and municipal), and give sustainability and equity to the pension system.

The good feelings generated by the new proposed ruling coalition show the way for Argentina to emerge from its secular decline. But it should not be overlooked that technical capacity to design consistent strategies and political ability to implement them are needed to go beyond the relief in financial markets and attract foreign direct investment.