﻿ Half of the wages are below the poverty line - IDESA

Half of the wages are below the poverty line

The poverty line is close to the median level of formal business wages. It means that many people cannot manage to get out of poverty even when they have a registered private job. This is the consequence of woeful public policies that destroyed productivity. 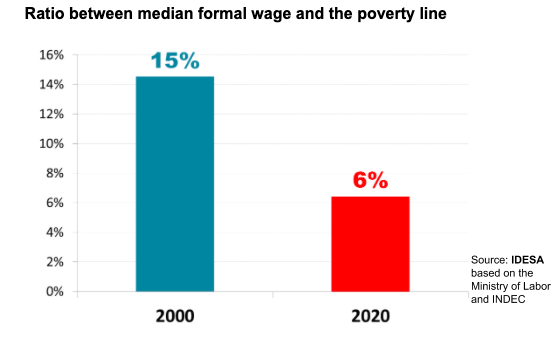 The INDEC reported that in October, the value of the Total Basic Basket (CBT) for a typical family reached AR$50,000. The CBT is also known as the “poverty line”. It is the essential goods and services that a four-member family needs to consume for not being considered poor. If the household’s income is below the “poverty line,” then that family is poor.

Regarding income generation, the labor market is very heterogeneous. In general, social risks increase when the households’ active members are without jobs (labor inactive or unemployed) or have a low-quality job (informal). Nevertheless, it is also interesting to analyze the situation when people are in registered wage-earning employment. A simple assessment of this issue may be done by analyzing the median of the formal wage.

This indicator measures the wage level at which 50% of workers are below and 50% above. In other words, if wages are ranked from the lowest to the highest, the median is the remuneration that is right in the middle in the wage distribution. Hereof, according to the Ministry of Labour and the INDEC, it is noted that

These data show that so far this century there has been a sharp deterioration in the purchasing power of wages in the formal sector. This phenomenon is associated with serious social degradation. It implies that even for workers who get a job in a formal enterprise, the probability that their wages are not sufficient to overcome the poverty line is high.

Traditionally, households were poor because their working-age members could not get jobs (labor inactivity or unemployment) or only got low-quality jobs (informal). With no or low-income jobs, the family will likely not get an income above the poverty line. However, with the formal wages purchasing power deterioration, what is happening is that income is not enough to lift people out of poverty, even holding a formal job. The connotation of this phenomenon is profound. The assertion that the way out of welfare schemes is through formal employment is no longer valid.

The underlying reason for wages deteriorations in terms of the cost of living is the loss of productivity. The fall in the population’s standard of living and, in particular, the higher incidence of poverty is the consequence of fewer goods and services produced per person. Therefore it is becoming harder for each person to obtain goods and services that are scarcer as time pass. The most extreme manifestation of low productivity is the high and growing number of households not meeting enough income to buy the basic basket that defines the poverty line. When low productivity is so massive, welfare programs can provide palliatives, but never solutions.

Raising productivity is the key to produce more goods and services per person. Higher productivity is in the roots of higher real wages and poverty reduction. Achieving this goal requires a context that encourages private investment and a strong commitment from the public sector to prioritize investment in infrastructure and in people’s human capital and education. A fundamental step in this direction is a comprehensive State reform.