The exchange rate crisis puts imports sustainability at risk. Reducing imports may save dollars, but it wipes out any possibility of economic recovery. Growth requires imports, and the latter needs more exports. 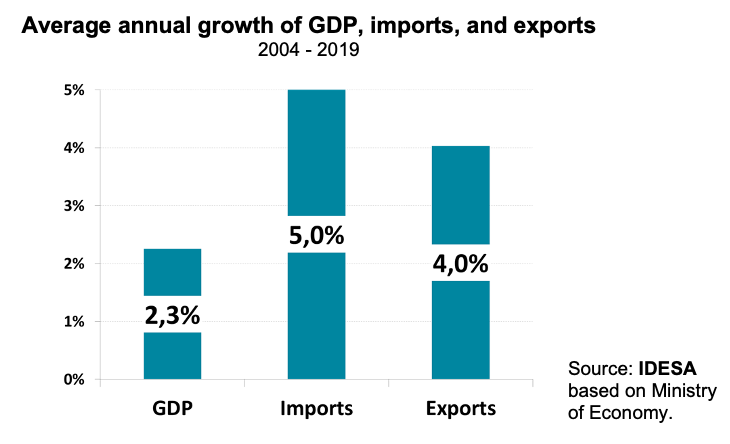 The INDEC reported that in September 2020, exports have been falling by -12% year-on-year. In turn, imports had also been declining at a rate of -24% year-on-year until August, but in September they had a small increase of 3% year-on-year. This reversal in the declining trend of imports responds to economic agents’ expectations regarding a possible devaluation of the official exchange rate. The widening of the gap between the parallel and the official dollar increases the doubts about the official dollar sustainability. The uncertainty leads to bringing forward imports and lagging exports.

Falling exports and growing imports put further pressure on the central bank’s reserves. In searching to avoid a traumatic devaluation, the authorities try to stimulate exports with temporary reductions in taxes and different constraints on imports.

These data show that for every point that the GDP grows, imports double. The reason is that more than 80% of imports are made up of capital goods, inputs, and spare parts. The main conclusion is that in order to put to work the economy, foreign currency is needed to pay for imports. Foreign trade statistics show that exports in Argentina grow at a slower rate than imports. This mismatch explains the unsustainability of Argentina’s economic growth. At the same time, it warns that obstacles to imports, which may be useful to preserve Central Bank’s reserves, are a barrier to economic recovery.

The secular stagnation of the Argentine economy is associated with foreign trade demonization. The idea that exporters are privileged and earn a lot of money is deeply rooted in Argentina, which justifies overcharging them with taxes. Imports are assumed to be a threat to domestic production activity and local employment, so they also deserve to be burdened with taxes and bureaucracy. As long as this view continues to prevail, there will be no chance to grow. Any attempt to revive the economy will fail because insufficient exports will not generate enough dollars to finance the imports that require a growing economy.

Additionally, there is now a rampant monetary expansion, intensified by the pandemic, but it had started earlier. The natural and foreseeable consequence is that people reject pesos and buy dollars to protect their savings. The problem is not that the official dollar value is overvalued (the official dollar is at lower than historical levels) but that the big fiscal deficit force a destabilizing monetary issuing.

Inaction and voluntarism lead fatally to a devaluation of the official exchange rate and the inflationary blow that will consume the excess of printed money. The way to avoid this traumatic, inefficient, and costly outcome is to address a comprehensive state reform. The reform points to four pillars. One is the social security systems (the national government’s main expenditure and critical in provincial finances). Another issue is the tax system (simplifying and unifying taxes to increase revenue with less tax pressure). Another one is the state’s administrative organization (eliminating national departments that overlap with provincial functions). The fourth is a federal organization (eliminating co-participation so that the provinces can finance themselves with their collection).