Inflation is making the fiscal adjustment

The outgoing government reduced primary public spending by 6% of GDP. This was not achieved with a public sector managing strategy but with real public expenditure reductions thanks to increasing inflation. In order to improve the social situation, it is key to stop using inflation as an instrument of fiscal adjustment. The outgoing economic authorities […] 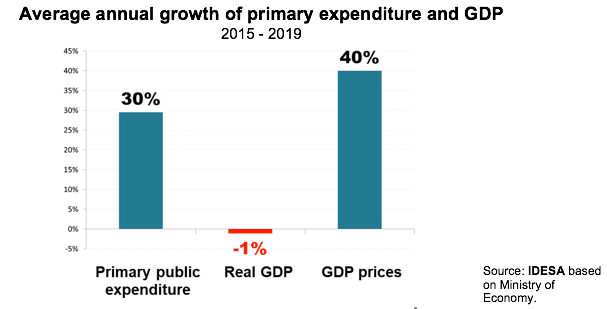 The outgoing economic authorities left their posts, projecting that the primary result in 2019 will be -0.5% of Gross Domestic Product (GDP). In this way, the “zero primary deficit” target set for this year will not have been met. However, the reduction of the fiscal imbalance is remarkable. In 2015, when the outgoing authorities received the government, the primary deficit was -3.8% of GDP.

The main determinant of this improvement in public accounts was the significant reduction in primary public expenditure from 24% to 18% of GDP. This fiscal effort is what made it possible to reduce the fiscal deficit, even when it was necessary to compensate income reductions, such as the return to the provinces of 15% of the co-participation that financed the federal social security ordered by the Supreme Court. In addition, the previous government also reduced several federal taxes.

How was such a decrease in public expenditure, measured in terms of GDP, achieved? In answering this question, it is useful to analyze the information published by the Ministry of Economy. According to this source, between 2015 and 2019, it is observed that:

These data show that the significant decrease in primary public expenditure, measured in terms of GDP, did not occur because public expenditure decreased or because the economy expanded. The fiscal adjustment occurred because of increasing GDP inflation. This is shown by the fact that the prices of goods and services consumed by the population grew far above what public spending increased. Faced with the chronic problem that the State tends to spend more than it can afford, inflation took charge of making the fiscal adjustment in a disorderly and socially costly manner.

One way to illustrate how inflation operates reducing real public spending is with pensions, which account for half of the primary expenditure. The indexation rule stipulates that pensions are adjusted quarterly based on inflation and salary increases from 6 months ago. This lag means that, in an upward cycle of inflation, pensions always grow less than prices. In addition, since the update is quarterly, in the second and third months of each quarter, there is an additional loss, since while pensions are fixed, prices continue to grow. With inflation already exceeding 50% annually, this loss of real value in pensions is making a decisive contribution to the reduction of public expenditure measured in real terms.

If the priority of the new government is to improve the social situation, it is essential to stop appealing to inflation in order to reduce real public spending. To this end, the organization and management of the State must be improved. For example, up to now, thanks to a high dose of inaction and hypocrisy, pension spending has been reduced in real terms, due to the fact that every month pensions lose out in the face of rising prices. The alternative way –which is much more equitable and honest– would be to reform pension regulations in order to improve financial sustainability with more equity and demographic adjustments.

In the same way, it is fundamental to advance in the public sector organization. Reducing the public resource squandering due to the superposition of functions between the federal and the provincial governments is key. Therefore, it is a terrible signal that the national government plans to fight hunger by preserving and strengthening federal ministries with bureaucratic structures that have already demonstrated their failure. Still, they will keep being overlapped with roles and functions that correspond to the provinces and municipalities.