Surprise prevailed given that the crisis has not generated a higher rise in unemployment. The main explanation is that the acceleration of inflation caused a deep loss in the real value of labor costs. This fact, together with the increase in informal jobs, was the rudimentary way by which the labor market adjusted. INDEC presented […] 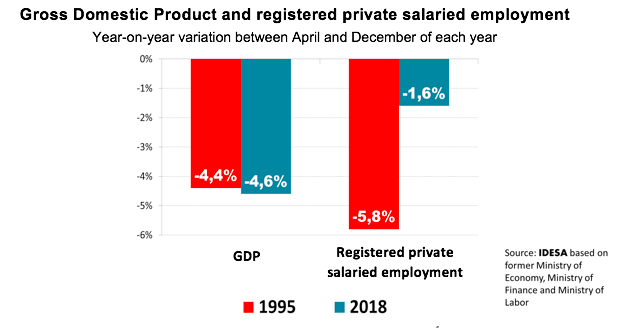 INDEC presented the information on the situation of the labor market in the 4th quarter of 2018. Expectations were very negative since unemployment was expected to reflect the consequences of the crisis, especially the sharp fall in production levels. In the face of such a severe contraction in economic activity, not only the lethargy in the new contracts was expected, but also massive destruction of jobs.

However, according to the INDEC, the unemployment rate in the 4th quarter of 2018 was 9.1% of the active population in the 31 large urban agglomerates of the country. This is a level significantly higher than the 7.2% recorded in the same period of 2017, but not very different from what had been observed in the previous quarters of 2018. Faced with forecasts that predicted double-digit rates, unemployment showed a fairly moderate variation.

How is this seemingly contradictory behavior explained? One way to approximate an answer is to compare the reaction of the labor market in the current crisis with that which occurred in 1995 when the economy was shaken by the “Tequila effect” and the unemployment rate reached 18%. According to official data it is observed that:

These data show that, at a similar drop in the economy, the formal labor market reacts in a very dissimilar way. In 1995, registered private salaried employment fell as much or more than the economy, while in 2018 this same employment fell just one-third of what the economy fell. A key factor behind these differences is inflation: in 1995 prices were stable, while in 2018 inflation was very high. This meant that in 1995 there was no loss of real wages, while in 2018 the fall in real wages was above 10%. That is, in a context of price stability and rigid nominal wages, the entire impact of the crisis translates into a fall in employment. On the contrary; nowadays, as inflation brings down the real wage and, with it, labor costs, it slows down the destruction of jobs.

It is possible to draw parallels of the impact of inflation on the labor market with that on public finances. Faced with the fiscal imbalance and the inability to fix the public sector in order to regain sustainability, inflation appears as an informal and rudimentary tool of fiscal adjustment. The price increases inflate the fiscal revenues and depreciate the real value of pensions, welfare benefits, public salaries, and other expenses. Therefore, the acceleration of inflation reduces the fiscal imbalance but transitorily.

Inflation and informality are not the solutions but part of the problems. The fiscal adjustment achieved through the depreciation of public expenditures, instead of fixing the public finances, is as primitive and costly as disguising unemployment by depreciating labor costs and increasing labor informality, instead of improving labor regulations. It is not a coincidence that in the countries that are making progress, the leaders do not want to appeal to inflation and informality because this means to conceal the problems. Instead, efforts on dialogue and consensus are made to improve economic, fiscal and labor institutions.