﻿ Investment must be increased to reduce poverty - IDESA

Investment must be increased to reduce poverty

The value of the Poverty Line has been growing above the formal wage in the economy. Under these conditions, even if welfare plans are massively deployed, poverty will keep high and growing. An unprecedented boost of investment in the economy is needed to reverse this process. 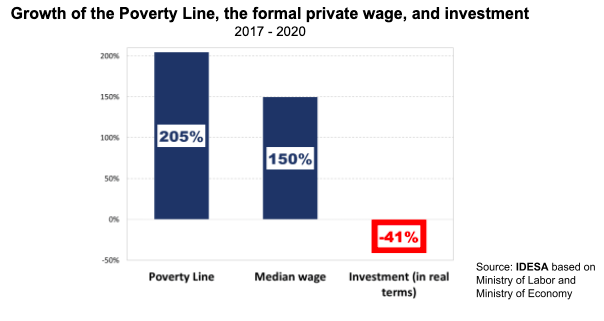 The INDEC reported the value of the Total Basic Basket (CBT) as of December 2020. This basket values the set of goods and services that families need to consume in order not to be considered poor. It is also known as the “Poverty Line” in the sense that those with incomes below this value are considered poor. It varies according to the household composition and size. The CBT usually used is the value for a four-member family. In December 2020, this family needed $54,000 to overcome poverty. This is almost 40% higher than December 2019.

The value of CBT is a useful tool to assess the social situation. Particularly relevant is the comparison with wages, which are the main source of the population’s income. If wages grow above the CBT, there is a process of social inclusion. Conversely, if wages increase below the CBT, social decline with increases in poverty is going on.

In order to evaluate the social dynamics of recent years, it is useful to compare the evolution of the CBT and the economy’s formal wage. According to data from the Ministry of Labour and the Ministry of Economy, it is observed that, between 2017 and 2020:

These data show that, since the onset of the current crisis, the poverty line has been growing well above the economy’s formal wage. With these trends, it is not surprising that the percentage of poor households has increased from 20% to 30% between 2017 and 2020. The key factor explaining this process of social decline is the collapse of investment. As investment falls, fewer and fewer goods and services are produced, while the population continues to grow, demanding more of them. The adjustment takes place through wages that are become insufficient to buy goods and services.

The link between investment and poverty puts limits on the role of welfare. If the investment is reduced, wages tend to grow less than prices, reaching the point where people, even if they get jobs, are unable to escape poverty. That is why the proposals, which swarm in political speeches, that the way out of welfare plans rely on formal employment is pure voluntarism. With a low investment, there is no chance that the beneficiaries of welfare programs will find a job that will allow them to escape poverty. The honest assessment is: with the current low levels of investment, employment does not lift people out of poverty; therefore, welfare is perpetual. Nor does the idea of taxing the wealthiest to redistribute in the name of solidarity make sense. If this causes investment to fall, poverty will multiply.

The National Budget 2021 presents official projections for investment in the period 2021 – 2023. It stipulates that investment will grow by 18% in 2021, 10% in 2022 and 7% in 2023. These are very modest targets as they imply that investment in 2023 will be 10% lower than in 2017. It means that real wages will not be higher than they were then. Therefore, more social decline will uphold without any possibility of reversing welfarism.

For employment to reduce poverty, an investment boom is needed. This requires a comprehensive reorganization of the public sector. On the contrary, if the chronic fiscal deficit and the consequent high inflation continue, the few savings that do not flee the country will continue to be allocated to State’s debt in short-term bonds with very high interest rates. In the meantime, real wages will continue to fall and poverty to rise.