﻿ Leliqs festival to defer the ordering of the state - IDESA

Leliqs festival to defer the ordering of the state

The coming inflationary acceleration is not new. It is the result of postponing the reorganization of the State and financing the deficit with monetary printing and debt. It has already happened to Cristina Kirchner and Cambiemos. The question now is whether the opposition this time is ready and willing to organize the State. 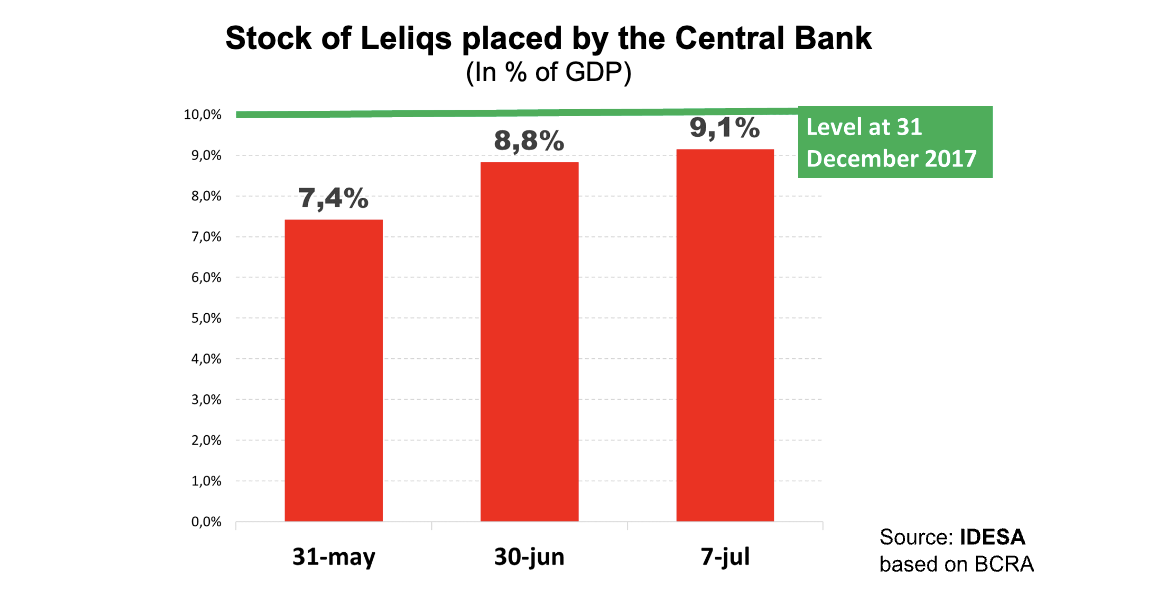 Leliqs is a word that has already become common knowledge among ordinary citizens thanks to the economic crisis. The fiscal imbalance can be financed in two ways: by issuing government bonds or by issuing money. As the issuance of money puts pressure on prices, the Central Bank sells Leliqs to commercial banks. The banks, instead of lending the money they receive from their customers’ deposits to companies or households, lend it to the Central Bank through the purchase of Leliqs. This operation is called “sterilization” because it removes the excess of money from the market in order to avoid its inflationary impact.

“Sterilizing” with Leliqs is not free. The Central Bank has to pay interest to commercial banks. The more Leliqs it issues, the higher the interest. This adds to the money printed to finance the fiscal deficit. The result is more peso issuance and a greater need to “sterilize”. When the printing of money reaches the saturation point, an exchange rate crisis occurs. In other words, people flee from pesos and run to buy dollars.

How far is the saturation point? As a close reference serves the exchange rate crisis in April 2018. In December 2017 Leliqs (at that time Lebacs) exceeded 10% of GDP. Data from the Central Bank shows that in the last 45 days the Leliqs:

These data show that the growth of Leliqs has accelerated in the last month. A key factor is that the government was unable to renew voluntarily all the government bonds maturing in June. In the face of private investors’ distrust, the Central Bank had to issue extra money –in addition to the already programmed to finance the Treasury– to buy Treasury bonds. This shows that the financing of the fiscal deficit by placing government bonds with private investors is saturated, leaving monetary issuance as the only source of financing. The Central Bank had no alternative but to mitigate the inflationary impact of the extra money by multiplying the Leliqs.

The underlying problem is that all past governments avoid the task of ordering the State. If the public finances were in balance there would be no need to issue Leliqs. The intense use of Leliqs began in 2013 to continue financing the growing fiscal deficit and was decisive in the “Fabregazo” of 2014. The Cambiemos government continued postponing the ordering of the State and appealed massively to Leliqs until the exchange rate crisis of April 2018. A third attempt was made to postpone the ordering of the State, this time under the tutelage of the IMF and the commitment not to issue money for the fiscal deficit, which ended in August 2019 with the “re-profiling” of the debt. The current government continued with the postponement of the ordering of the State taking the Leliqs to the current unsustainable level.

The short-term scenario is of greater exchange rate instability and inflationary acceleration. The weaker the political leadership and the technical expertise, the greater the traumas derived from the saturation of the Leliqs. It would help a lot if the leadership of the government coalition was clarified and the ordering of the State started. Particularly critical and a priority is to change the irrational energy and transportation subsidies.

How the current government gets out of the trouble is very important. But more important is how the next government prepares itself. If the idea that the State’s reorganization can be postponed with monetary maneuvers persists, the crises will continue. On the contrary, if the time remaining before the change of government is used to prepare disruptive transformations in the organization of the State, in order to reorganize it integrally, there are grounds for hope.