The escalation of the dollar generates anxiety. The process will not be stopped by the Central Bank selling more dollars. To control the situation a consistent plan to reduce the fiscal deficit is required. This must include improving the management of social programs and ending inequities in the pension system. The elimination of the Football […] 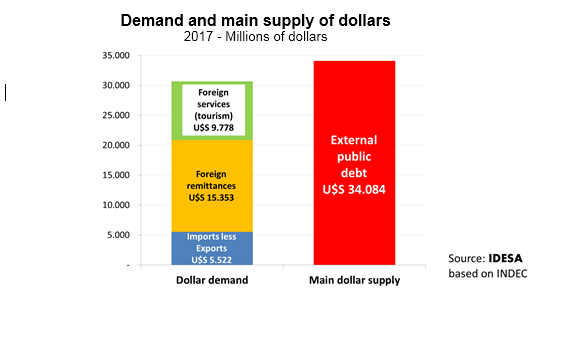 The elimination of the Football Team of the World Cup in Russia causes frustration. Especially, since an exceptional group of first class players were squandered. For the thousands of people who traveled to Russia to encourage the National Team, the unforeseen increase in the travelling cost is added, by having to face expenses with the dollar reaching the AR$30.

When the World Cup began, the dollar had already jumped from AR$20 –which was the value until March– to AR$25. That means a devaluation of 25%. The fans abroad, in addition to the illusion of seeing the Argentine National Team as champion, had the expectation that the dollar, after such adjustment, would remain stable. However, it went further up another 20% until AR$30 altering in a significant way the originally planned costs of the trip.

What is causing this intense and persistent pressure on the dollar? Like in any market, the value of the dollar is determined by supply and demand. To observe how these variables behave, it is useful to appeal to the data of the Balance of Payments. In the year 2017 –when the dollar was below AR$20– the following could be observed:

These data indicate that, at dollar at AR$20, there was an annual external demand in the order of US$30 billion. This need for foreign exchange was covered mainly by the income of around US$34 billion generated by new public foreign debt in dollars. Under the argument that it is necessary to go forth gradually in the fiscal order to avoid social costs, a strong foreign currency income was induced via public external debt. The abundance produced an artificially low value of the dollar. The counterpart was the discouragement of exports, the increase in imports and a massive tourism abroad (including trips to the World Cup).

The weakness of the strategy is visible. Not only because the Balance of Payments, but also because the reductions in the primary fiscal deficit (which the authorities emphasize with insistence) are barely enough to compensate the increase in interest payments generated by indebtedness. As the total deficit (primary plus interest) does not fall, the need to continue taking new debt does not stop. This explains the loss of confidence of investors, even when an agreement with the IMF has been reached for unprecedentedly high amounts. The fact that the state now has these dollars does not solve the underlying problem since sooner rather than later they will be consumed by the total fiscal deficit that does not fall. The persistence of the turbulence, even with an agreement with the IMF, shows that the problem is not the scarcity of dollars but the excess of public spending.

The rise of the dollar is not going to be stopped by the Central Bank but only through a consistent strategy of reducing public spending. It is essential to continue with the elimination of subsidies for public services that benefit middle and high income households and review the programs through which national ministers waste resources in the aspiration to co-manage services which are in charge of the provinces and municipalities. It will also help that the federal government stop managing the public services that must be in charge of the local governments of the Autonomous City and the Province of Buenos Aires.

It is not less important to review the social programs, including the pension system. Retirement and pension spending is the highest in the public finances and has been growing at 30% per annum, much higher than the rate at which public revenues grow. Therefore, it is inconsistent to insist on not correcting costly injustices such as, for example, the double pension coverage caused by the survival pension rule.