Nation and CABA conflict shows that co-participation must be scrapped

The conflict between the federal government and CABA exposes the co-participation’s exhaustion. Instead of insisting on a new co-participation law, taxing powers must be returned to the provinces. For the Northern areas, a convergence fund should be rolled out to accelerate their social development. 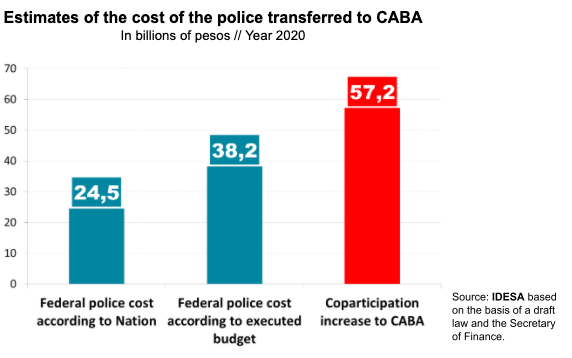 The Autonomous City of Buenos Aires (CABA) historically received 1.4% of the federal tax share. In January 2016, the federal government and CABA signed an agreement to transfer the Federal Police to CABA’s jurisdiction. The CABA Legislature approved the deal, but it was not submitted to the national Congress. By a federal decree, CABA’s share was increased from 1.4% to 3.75%. With the Fiscal Consensus 2017, this participation was reduced to 3.5% in order to adapt the percentage to the tax changes taking hold in that agreement.

The current federal government claims that this percentage of co-participation exceeds the transferred police expenditures. Therefore, in September 2020, it reduces the percentage to 2.32% by decree. With the remaining funds, it finances the so-called Fund for Fiscal Strengthening of the Province of Buenos Aires. Now, the national government is promoting a law by which CABA’s share will be 1.4% again, and the national treasury will transfer $24.5 billion annually, to support the transferred police force.

A key fact is that no official study on the cost of the transferred services was ever presented. Using historical budget from the Ministry of Finance, the following picture can be drawn for 2020:

These data show that the portion of co-participation granted would exceed what the transfer of the Federal Police entails. At the same time, they also show that the amount set in the law promoted by the current national government would not be enough to cover these costs. If the issue had been handled more transparently and seriously from the beginning, the conflict probably could have been avoided. But this is another case of contempt for institutions that degrades the public sector’s administration.

Part of the gaps occurred because the increase in CABA’s share was handled with ambiguity in the rule and little transparency. By setting it as a percentage rather than a fixed, updateable amount, there was no guarantee that the additional income CABA receives would be similar to the transferred services’ costs. In practice, the mass co-participating increased due to an extraordinary event: the return of 15% that was destined to the pension system. This caused the CABA’s share to grow beyond the cost of the police. Today, with the law promoted by the government, the resources transferred to CABA are not going to compensate for the expenses of the transferred services.

But the most unusual aspect of this mess is that the national state ends up financing the security services of the richest jurisdiction in Argentina and possibly in the Southern Cone. This is further evidence that there is no point in insisting on a new law of co-participation. A mechanism that centralizes 80% of the tax revenues at the national level and then distributes it among jurisdictions generates unfair, distorting, inefficient and conflicting treatments. Obscure and discretionary distribution rules are entrenched in the centralization of resources at the national level.

A better policy would be to decentralize taxing powers to the provinces. Each jurisdiction must finance itself from its own taxes. Thus they will be accountable to society for the services they provide in return for those taxes. For the backward Northern provinces, a developed fund financed by the richer provinces, on time bound basis, would be enough.