No coparticipation and more autonomy for the provinces

The major distorting factor of Argentine fiscal federalism is the tax coparticipation. It must be eliminated, and taxation powers must be shared between the federal level and the provinces according to their responsibilities. This arrangement would make a better contribution to the good management of the public sector. 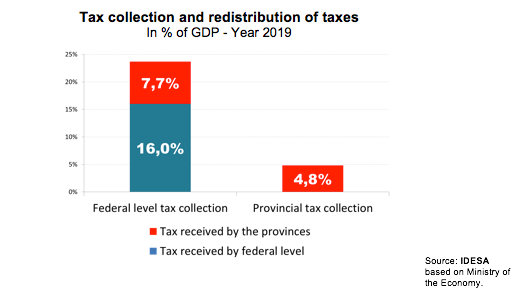 In the parliamentary discussion on the extension of the national budget, the representatives of the interior’s provinces raised their objections to the transport subsidies received by the Metropolitan Area of Buenos Aires (AMBA) from the national government. The federal interference in a local issue, such as urban and interurban transport, was not questioned. The claim was for the arbitrary distribution of the funds. The conflict was settled by establishing that the national state would allocate $9.5 billion this year to subsidize also the public transport service in the interior of the country.

The theory of fiscal federalism suggests that good organizational practice allocates taxing powers among jurisdictions in line with their responsibilities. In this way, citizens can identify what services they are receiving for the taxes they pay and which jurisdiction must be accountable for the quality of those services. This accountability is the basis for the fiscal organization of developed federal countries, such as the United States.

How is federalism structured in Argentina? According to data from the Ministry of the Economy for 2019, the total tax burden was 28.5% of GDP. This tax pressure was generated and distributed as follows:

These data show that the federal level collects most of the taxes (82%) and keeps a high proportion of them (67%). On the other side, the provinces collect a smaller share (18% of the total). Since the provinces provide most public sector services, there is a considerable imbalance. Automatic transfers cover this imbalance through co-participation (on average, it gives 62% of the provinces’ resources), federal discretionary transfers, and national government spending on functions that belong to the local governments.

The scheme embodies very perverse incentives, which are among the main factors explaining Argentina’s decline. Provincial leaders are not induced to develop their province’s competitiveness to generate a sustainable fiscal resource base. Actually, the province that prospers increases the federal and the rest of the provinces’ tax revenues. In other words, the incentive is not to increase tax revenue but to plunder it.

The distribution of resources through co-participation is arbitrary and unfair, but at least it is automatic. The federal discretionary transfers and the expenditures made on services under the provinces’ responsibilities have a worse effect. In 2019, subsidies for energy and transport represented 1.6% of GDP and transfers to provinces from national programs (health, education, social development, security, environment, housing, and urban development) another 0.8% of GDP. These transfers, which are now much higher than last year, are more harmful than co-participation. National officials are irresistibly tempted to use them as a tool to bend the political will of local politicians in the interior of the country. Meanwhile, provincial governors find it easier to beg for crumbs from the federal power instead of managing the services it should provide to the people properly.

The current tax redistribution scheme discourages effort, creativity, and innovation. Instead, it rewards mediocrity. The problem will not be solved by reforming co-participation. Much more conducive is to eliminate it and to devolve each province taxing powers for self-financing. For the Northern regions, which may not be self-financing because of their development lag, a convergence fund could fill the financing gap and encourage their development acceleration.