﻿ No quality employment has been generated in the las decade - IDESA

No quality employment has been generated in the las decade

The discussion between the vice-president and the piqueteros movement confirms that welfare is useful for clientelism and corruption, but not for the poor. Social assistance should be decentralized to local governments. However, the most important thing is to create the conditions to generate more quality jobs. 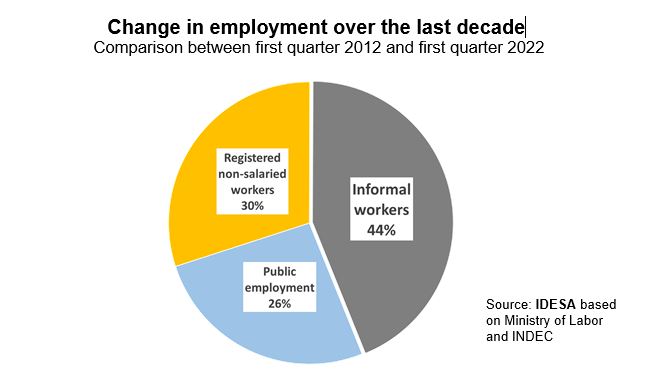 The public finances show a sharp increase in the fiscal deficit in May. The expenditure which increased the most –although it is not the only determinant of the deficit– is that of the national Ministry of Social Development, due to the welfare plans, mainly the Tarjeta Alimentaria and Potenciar Trabajo. In the April-May period, these expenditures increased from AR$100 billion last year to AR$320 billion this year. It is logical to associate the tripling of the welfare budget to the fact that some of the benefiting piqueteros groups are among the main political support bases of the President.

The Vice-President questioned the “privatization” of the administration of welfare plans in the piqueteros groups. She vindicated work over welfare. She also criticized the imposition to the beneficiaries to participate in marches and contribute financially to the organizations. It confirms that welfare plans serve more for clientelism and corruption than to reduce poverty. It is explicit that the poor are used for the benefit of the powerful.

Why does the piqueteros movement have an influence similar to that of the union movement, the one most associated with labor? To answer this question, it is useful to appeal to data from the Ministry of Labor and INDEC. According to these sources, between the first quarter of 2012 and the same period of 2022, there were 2.8 million new employed of which:

These data show that all employment growth in the last decade has been in the State, in domestic service, in self-employment and in informal occupations. Private companies did not generate new registered salaried jobs. This dynamic is decisive in explaining the opportunities given by poverty and the lack of decent jobs to use welfare plans. The growing influence of the piqueteros is due to the failure to generate quality jobs.

The vice-president is right when she questions the piqueteros leaders for appropriating the welfare plans. But this is not solved by passing welfare management to national officials. It makes no sense to have a national Ministry of Social Development. Social assistance should be managed by local governments with drastic simplification, improved design and more modern management mechanisms. Local governments should manage welfare and the national government should audit and publish information on the results of each local government’s management. For the latter, there is no need for a national ministry. A national agency is sufficient.

But the most important thing is to assume that no social assistance –no matter how well it is managed– can compensate for the lack of good jobs. In order to stimulate the labor market, a favorable context for production and investment is necessary. This requires macroeconomic stability, simplification of the tax system, legal certainty, better regulations, and the development of infrastructure and logistics. In addition, labor institutions that do not punish (they don’t need to reward) companies that generate registered salaried jobs. Key points are lowering social contributions, mainly for SMEs, decentralizing collective bargaining at the SME level, and eliminating the multiplication of severance pay to reduce and make more predictable the cost of termination of employment.

All of the above does not guarantee more quality jobs if people do not achieve reasonable levels of education. The Aprender 2021 test shows that 70% of children of low socioeconomic levels do not have reading skills. In the face of such a failure, it is a mistake to blame the national government for closing schools because of the pandemic. The problem was there before the pandemic and the management of schools is the responsibility of the provincial governments, who are responsible for the quality of education.