﻿ PAMI has a structural insufficiency of resources - IDESA

PAMI has a structural insufficiency of resources 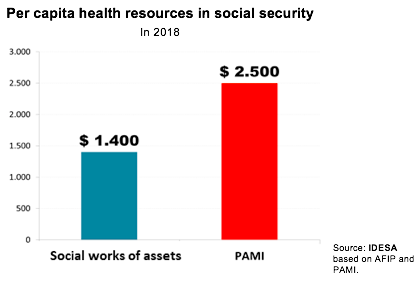 The health coverage of social security in Argentina has a particularity. People who work in the private sector and the national public sector contribute during their working life to a sickness fund (obra social). It is about 9 million salaried workers in private companies and the national public sector. Of these, a third derives its social security contribution to a prepaid medicine company (through the so-called “contribution derivation “). However, when they retire, their affiliation to the obra social automatically stop and a new membership starts in PAMI (the health coverage scheme for the retirees and pensioners).

For many people, especially those with medium and high incomes, the passage to PAMI means a quality decrease in medical services. Proof of this is that recently the Justice (in the case “Users and Consumers United v. UPCN”) decided to order an obra social to refrain from stopping the affiliation to members who retire and have not communicated their willingness to move to PAMI. The sentence is so hard that it orders the obra social to offer re-affiliation to those who had been transferred to the PAMI even if they had not promoted a legal action.

Why go to PAMI implies worse quality medical services? The level of per capita resources of each type of coverage scheme shed some light on the answer. According to estimations based on data from the AFIP (tax agency) and the PAMI, it is observed that:

These data show that the PAMI suffers from a structural insufficiency of resources per capita. If bureaucratization and management deficiencies are added to this financial inconsistency, the low quality of services suffered by the elderlies is explained. Thus, the coverage rule that automatically affiliates all new retirees to PAMI threatens the financial sustainability and medical quality of the social security health system. If the acceleration of demographic aging is also considered, preserving this coverage rule with insufficient financing puts at risk the future health –economic and personal– of all retirees.

In response, the national authorities made a simple decision but with a high potential impact in favor of financial consistency. They increased the value of the capita that PAMI transfers to the obras sociales when the people who retire decide to stay in their obra social. This amount was outdated at just AR$ 198 per person per month. Now it will be AR$ 1,365 per month. With the ruling of the Justice prohibiting from forcing the new retirees to join PAMI plus this update of the capita that PAMI transfers to the obras sociales for the retirees that remain in them, the elderlies will have higher possibilities of maintaining the health coverage they had during their working life. Even those who make “contribution derivation” to a prepaid health care companies could be able to derivate the PAMI capita to the same prepaid paying only the difference with the price of the health plan.

This measure strengthens the financial coverage of the social security. First, the high cost of retirees will be financed by the low spending of the working population that is younger. Furthermore, retirees who choose not to join PAMI take with them only their capita, which is an average value, meaning that it does not destabilize financially the rest of the retirees who remain in PAMI. Likewise, retirees themselves can supplement the PAMI capita with out-of-pocket payments to obtain better services.

The social security system, both in its pension component (ANSES) and in the health coverage of old age (PAMI), is in crisis. Therefore it needs profound reforms. This administrative change is far from solving the most severe problems. But it demonstrates how small changes can make improvements to financial sustainability. ANSES should emulate to PAMI with these simple but with relevant impacts methods.