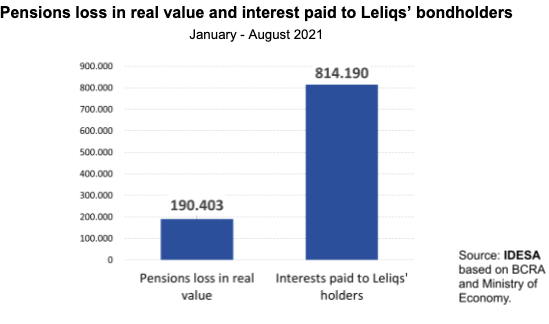 Controversies within the government coalition regarding fiscal policy are still active. The main point is the social benefits’ loss in their real value. Part is explained by the fact that social spending was reduced this year thanks to a waning of the pandemic’s effects. But the most important adjustment occurred because inflation eroded pensions’ purchasing power. In the first 8 months, pension spending increased 35% over the same period last year, when inflation averaged 47%.

Is it feasible to increase pensions at the same rate as inflation? To the extent that it implies a fiscal deficit increase, with very limited access to credit, there is no alternative but to resort to more money printing. As the monetary expansion is rejected by the population, pressures on the dollar and inflation exacerbate. In order to mitigate these pressures, the Central Bank is forced to absorb the pesos surplus by selling Leliqs in the financial system. For this debt, the Central Bank pays interests that further increase money printing.

In order to have some idea about the orders of magnitude of this problem, data from the Central Bank and the Ministry of Economy can shed some light. According to these sources, it is observed that:

These data show that what the Central Bank paid in interest is equivalent to 4 times more than the pension loss in real value. In other words, the effort to which retirees are subjected, losing purchasing power with inflation, was enough to finance only a quarter of the interest paid by the Central Bank to the financial system for the stock of Leliqs.

The current president, in his 2019 electoral campaign, promised that he would increase pensions with the interest paid by the previous government to the Leliqs’ holders. The exact opposite is happening. Pensions’ real value is lowered while Leliqs interests are increasing exponentially. It is not that the president does not want to increase pensions and instead wants to benefit the banks. The origin of the problem is that the fiscal disorder –of which the pension system disorder is an essential part– leads to an excess of the monetary printing that the Central Bank desperately tries to sterilize in its impact on inflation by paying increasing interests to the Leliqs’ holders, which are the commercial banks.

In this context, the electoral plan of “putting money in people’s pockets” while ignoring the magnitude of the Central Bank’s debt is very risky and irresponsible. Particularly serious are decisions that imply future commitments, as is the case of relaxing the requirements for new pensions. The latter means more fiscal deficit. The more money the Treasury asks the Central Bank, the more money the Central Bank will have to absorb with Leliqs. This will imply more interest to be paid to the commercial banks, partially paid with the loss in the pensions real value thanks to higher inflation.

Solutions are not either to increase –as proposed by the Vice-President– or to let inflation adjust pensions –as proposed implicitly by the Minister of Economy–. It is necessary to change the strategy by focusing on a comprehensive reorganization of the public sector. It must be aimed at balancing the public finances together with a profound public management improvement. Some of the key areas in which it is essential to work with professionalism and innovative spirit is in eliminating overlapping taxes and expenses between levels of governments, eliminating co-participation by creating a convergence fund to support transitorily the northern provinces, and to reorganize the pension system.