The government proposed a law to protect the assets of the Sustainability Guarantee Fund. This is a euphemism to preserve the faculty to appoint State directors in private companies. The Fund’s private assets are already of an irrelevant magnitude compared to the pension deficit dimension. 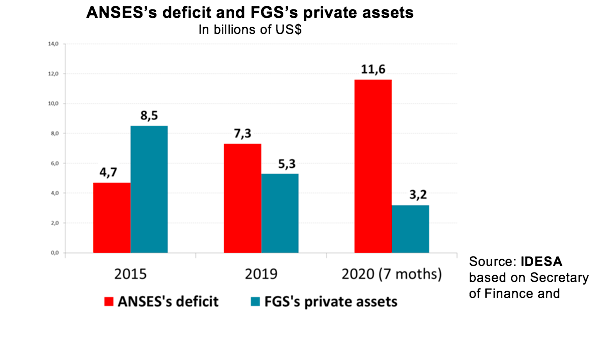 Until the end of 2015, the ANSES (the federal pension agency) use to receive 15% of the co-participation when the Supreme Court ordered its return to Córdoba, Santa Fe, and San Luis provinces. In 2016, the government of Cambiemos agreed with the rest of the provinces to return this levy as well. To this end, a gradual schedule was established at a rate of 3 percentage points per year, plus 3 percentage points in the form of loans granted for 4 years from the ANSES’s Sustainability Guarantee Fund (FGS).

By 2020, all provinces have recovered that 15%, so they will have to pay the loan’s first installment. However, the affected provinces asked the federal government to reschedule this debt. The latter responded with the “Defence of the FGS Assets” law project. This project proposes that the provincial debts will be rescheduled and, to avoid the ANSES’s deficit “eating” the FGS assets, the Treasury will cover the pension deficit.

The FGS was set up in 2008, with the savings seized from the private pension funds. It aims to support the pension system financially.  How solvent is the fund can be observed comparing it with the magnitude of the pension deficit. According to data from the Ministry of Finance and the ANSES, it can be seen that:

This data shows that the FGS is depleted and does not fulfill its alleged role as the pension system guarantor anymore. Ninety percent of its assets are Treasury’s bonds and, marginally, loans at subsidized rates. Its only genuine assets are private companies’ shares that generate dividends and can be traded in the market, but they are becoming insignificant. In 2015 they covered almost two years of the ANSES’s deficit. At present, they will barely be enough to finance 2 months deficit.

The FGS exhaustion is a consequence of policies based on hypocrisy, neglect, and opportunism. In 1992, the federal level and the provinces agreed to transfer 15% of the co-participation to ANSES to finance the transition of a reform that sought to achieve pension sustainability based on creating a mixed system. In 2008, the reform was unraveled. But the federal level did not give back the 15% of the co-participation to the provinces. On the contrary, it decided to increase spending exponentially by granting pensions indiscriminately without contributions with moratoriums.

The Court took 7 years to rule in favor of three provinces the devolution of the 15% of co-participation. Faced with the pressure generated by this ruling, the Cambiemos government limited itself to negotiate with the rest of the provinces the gradual devolution. Shortly thereafter, in 2016, it allocated all the revenues collected by a special tax to cancel the pension debt with retirees who were denied indexation during 2002-2008. But in terms of pension reform for sustainability, it only created a special commission that never functioned.

The government now reschedules the provinces’ debt to the FGS, manipulates again the indexation rule promoting more judicial claims, and continues evading talking about pension reform for sustainability. It only proposed the law to protect the FGS’s assets. This law is of little relevance to retirees, but very attractive politically because it maintains the directors’ appointments in the private companies where the FGS is a shareholder. As long as this consensus in favor of keeping the pension system clutter continues, the degradation will negatively affect current and future retirees.