﻿ People run away from the argentine pesos - IDESA

People run away from the argentine pesos

The main challenge for the new president is to balance public finances. It is not an explicit citizens’ demand, but an implicit one underlined in the growing rejection of the Argentine peso. This is observed in the people’s urgency to buy goods or dollars to get rid of the pesos and protect themselves from high […] 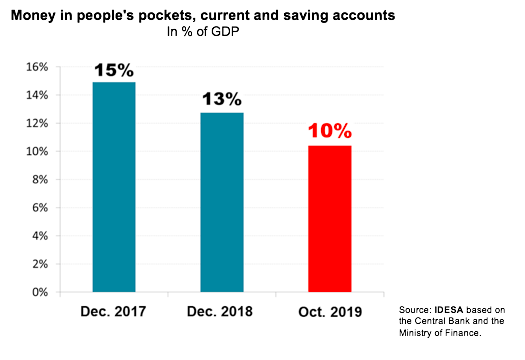 The new administration has many emergencies in a climate of the high instability of exchange rate and the financial system. This leads the attention to the level of international reserves. It is of great concern that, before the primary, the foreign reserves in the Central Bank were U$S 66 billion, and just before the election, they were U$S 46 billion. In only 2 months, the Central Bank lost U$S 20 billion in international reserves.

The proposals are varied. Initiatives range from reducing the quotas that small savers enjoy today to prohibit official dollars purchases for saving and tourism, concentrating their use to finance imports. More drastic proposals aim to re-edit the “Bonex Plan”, that is, to exchange the Central Bank notes (LELIQs) for a longer-term bond rescheduling the devolution of fixed deposits in the bank accounts. The common element of all proposals is to limit the bleeding, instead of addressing the causes of the bleeding.

In order to understand why the drainage of reserves continues, it is advisable to observe how people’s possession of Argentine pesos behaves. Taking the ratio between the pesos that people have in cash, in current and in savings banks accounts and the Gross Domestic Product (GDP), which measures the size of the economy, it can be observed that:

These data show the growing rejection that citizens feel for having Argentine pesos in cash or bank deposits. In a context of high and increasing inflation, people are looking for protection quickly, buying any goods or dollars. Obviously, the mechanisms used vary according to the income level of the person. But beyond the instrument, the logic is the same: to run away from the pesos avoiding inflationary tax.

The main conclusion is that the new administration will face many barriers to finance the fiscal deficit. On the one hand, no creditor is willing to lend money to the State. The clearest evidence is the “re-profiling”, an elusive denomination that was used to postpone the repayment of public bonds due to the market’s refusal to refinance them. But most worrying is that people are not willing to accept more monetary expansion either. Without the possibility of issuing new debt and without the willingness of the people to accept more pesos, the risk of hyperinflation is high.

Intensifying the exchange rate controls, debt “re-profiling” and/or a broad social pact are mere palliatives. None of these measures, alone or in combination, goes to the origin of the problem, which is the terminal insolvency of the public sector. In the best of cases, they may help to gain some time while measures to reverse more than half a century of systematic fiscal deficits are taken. The only way to avoid hyperinflation is with budgetary solvency. Doing this requires a comprehensive strategy for the tax, pension, and functional organization of the public sector must be addressed.

A sound and credible fiscal management strategy can convince the International Monetary Fund (IMF) to continue lending money and the rest of the creditors to accept “re-profiling”. But the most challenging task will be to convince the ordinary citizen to trust the Argentine peso once again. That is, to persuade them to stop buying excess merchandise or dollars in order to protect his income from high inflation.