﻿ Poverty grew higher than in Chile and Uruguay - IDESA

Poverty grew higher than in Chile and Uruguay

The INDEC reported that poverty remains as high as in the worst moment of the lockdown. In the Southern Cone, Argentina is the country that suffers the greatest impoverishment of the population. The low public management capacity explains the low effectiveness shown by the growing welfare spending. 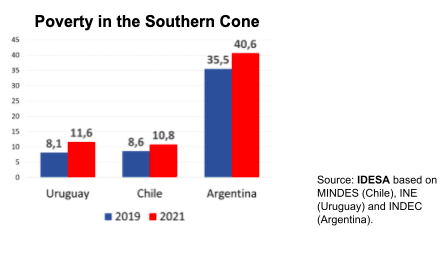 The current government took office in a context of deep economic and social crisis. Three months into its term, in March last year, the pandemic put it at a crossroads. The coronavirus that had broken out in China moved to Europe and dramatic images of overflowing intensive care units and massive deaths spread. In the face of uncertainty and anguish, the idea of locking up the population to prevent contagion gained momentum. This posed a very difficult dilemma because it implied worsening the economic and social suffering.

The decision of the national government –with broad support from various sectors– was to opt for strict and prolonged lockdown. Neighboring countries, such as Chile and Uruguay, administered the population’s confinement with more care by focusing it on the places where the infection was most intense. In the case of Uruguay, isolation was also advised, but not imposed. A year and a half later, the results show that Argentina has accumulated 2,500 deaths per million inhabitants, while Chile has 2,000 and Uruguay 1,800. From the sanitary point of view, strict lockdown did not prevent more deaths.

What happened from the social point of view? According to data from the Chilean Ministry of Social Development and the statistical offices of Uruguay and Argentina, it can be seen that:

These data show that the social conditions in which Argentina entered the pandemic were much more delicate than those of its neighbors and that in the context of the health crisis the differences deepened. Although for methodological reasons the figures are not strictly comparable, the differences in levels and trends are very suggestive. With the pandemic, poverty rose between 3 and 4 percentage points in Chile and Uruguay and 6 points in Argentina. Argentina not only had worse results in terms of deaths but also in impoverishment.

The first lesson is that it was a mistake to take such strict lockdown without scientific support. Health fundamentalism did not prevent deaths and produced enormous economic and social damage. With more pragmatism and humility, neighboring countries did not avoid contagion peaks, health system overflows, and deaths. But they achieved better health results and did not fall into the extravagant paralysis of the social and productive activity.

There is a second, less visible, but no less important lesson. The low public management capacity reduces the effectiveness of efforts to mitigate the social consequences of the lockdown. It is not that the Argentine State neglected economic support to the population. The point is that it multiplied welfare assistance but in a highly improvised manner. Families receiving the Universal Child Allowance (AUH) were given also a food card and, in a further overlap, other welfare programs from the Ministry of Social Development. Provincial and municipal help programs were also added to the federal ones in an uncoordinated manner. All these efforts did not prevent 11.7 million people from becoming impoverished in 2020 and, worse, the number of indigent people from increasing by more than 100,000 in 2021 against 2020, when the pandemic subsided and the welfare help was maintained. The same poor public management is observed when the government improvises an early retirement program when ANSES (the pension agency) shows a big delay in new pensions entitlements. Thus, the government vows to protect the unemployed with and early retirement, when people in normal conditions to retire cannot do so due to the public sector long administrative delays.

Impoverishment with more welfare spending is not an exclusive derivation of the errors caused by the pandemic. It is fundamentally the result of the lack of public management capacity. With obsolete management schemes, the public sector inevitably falls into improvisations and opportunism. Under these conditions, even spurious objectives such as “putting money in people’s pockets” for electoral purposes are doomed to failure.