﻿ Reduction of fiscal deficit was achieved thanks to inflation - IDESA

Reduction of fiscal deficit was achieved thanks to inflation

The low fiscal deficit is good news but should be taken with caution since it was based on the inflationary surge. The reason is that the fiscal revenues follow the increase in prices while pensions and public salaries do the same but with delay. Sustainable fiscal balance can only be achieved through fiscal reforms. The […] 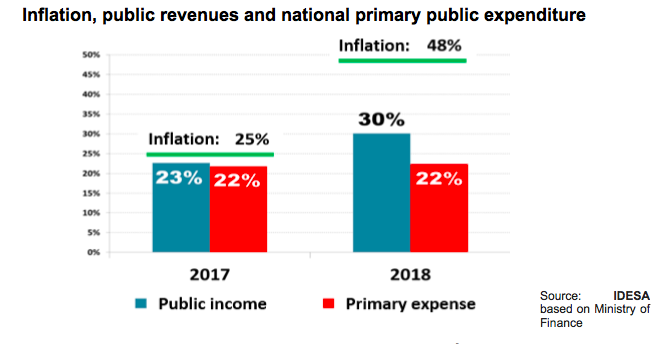 The achievement was highlighted with enthusiasm by the economic authorities. However, there is no similar feeling among economic agents. On the contrary, doubts and distrust persist and, associated with this, a persistence of the recession. The factors that contribute to pessimism are several but one of high relevance is about the means used to boost the balance of the federal public finances.

In order to evaluate the sustainability of the reduction of the fiscal deficit, it is pertinent to analyze the data published by the Ministry of Finance. According to this source it is observed that:

These data show that the reduction of the fiscal deficit in 2018 was achieved thanks to the fact that tax collection tended to grow at the same pace as prices rose while expenses also escalated, but below inflation. The VAT and the tax on financial transactions reacted almost automatically to the inflationary acceleration and the strong devaluation provided space for the reinstatement of the export tax. On the side of expenditures, the containment focused on economic subsidies and public works and on the fact that pensions and public salaries grew below inflation. This dynamic suggests that a decisive factor in the fiscal adjustment was the devaluation and its inflationary impact.

For 2019, the official proposal is to deepen the fiscal adjustment until reaching the zero primary deficit together with the deceleration of inflation. This is reflected both in the 2019 Budget and in the agreement with the IMF. For this, the full collection (and not just for a few months, as has happened in 2018) of the export tax will be available. But, as a counterpart, there is no margin to alleviate public accounts through the reduction in real terms of pensions and public salaries as was done in 2018. Quite the contrary, with falling inflation the pension indexation rule will impose a growth in social security spending above prices. In other words, while inflation accelerated in 2018 playing in favor of the reduction of the fiscal deficit, in 2019 the deceleration of inflation will play against it.

In the last 60 years, Argentina had only 6 years with fiscal surplus that were between 2003 and 2008. It is not an exception to the systematic Argentine fiscal indiscipline but because the 2002 mega-devaluation produced a drastic reduction in real terms of salaries and pensions. The improvement in the public finances in 2018 had similar characteristics: revenues tended to grow automatically with inflation and state expenditures reacted with delay.

Part of the prevailing skepticism is explained by the fact that the fiscal adjustment emulates the spurious method used in 2003. In order to pass to a superior instance, an integral reengineering of the public sector must be addressed. This includes, fundamentally, the reform of the pension system, rethinking the organization of the tax system to reduce tax pressure by expanding the collection base and the professionalization of public employment.