﻿ Subsidies are the only public expenditure that have dropped - IDESA

Subsidies are the only public expenditure that have dropped

The presidential veto to an opposition initiative ordering the comeback of the utility subsidies laid bare the mediocrity of politics. The fiscal situation is critical and the reduction of subsidies is the only advance. Ordering the public finances demands a more integral approach that includes a pension system reform and the reconstruction of federalism. The […] 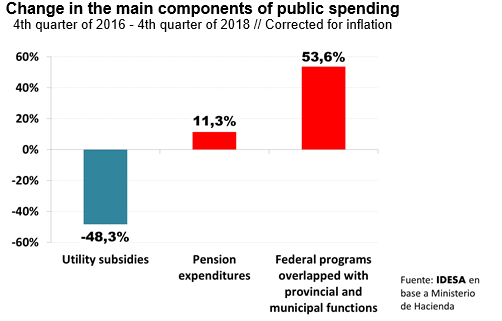 The opposition was behind the enactment of a law that would annul the increases in electricity, gas, water and transportation tariffs applied since December 2017, returning to the level of November 2017. It would also established that tariff increases should not to be superior to wage increases and that utilities companies would have to return to the users the amounts charged corresponding to the annulled increases.

In case that the tariff increases were canceled and the amounts charged refunded did not imply that the companies would take the money out of their own pocket for the users. It implied that the federal state would have to compensate the companies with subsidies for the amounts refunded and for the insufficiency of the tariff with respect to the cost of the services. Thus, national public spending would have increased -according to official estimates- by more than U$S 5 billion at 2018 prices. This was the argument for the veto.

To have a more consistent and comprehensive view of the issue, it may be helpful to give a look at data published by the Ministry of Treasure. According to this source, between the first four months of 2016 and the same period of 2018 it is observed that:

These data show that the opposition initiative attacked the only factor that up to now had been contributing to reduce the fiscal deficit. The concern about the increase in utility tariffs is understandable. But to cancel the only action used to correct the serious fiscal situation is the best way to aggravate the problems. Much more conducive would have been to seek moderation of the impact by reducing the incidence of taxes on the total cost of tariffs. This behavior laid bare the irresponsibility that emerges when politicians try to take electoral advantages through opportunism.

The veto is a failure of political management. On the one hand, it reflects the inability to agree on rational alternatives that give viability to the process of adjusting the utilities tariffs. On the other, it highlights the myopia to address the very delicate fiscal situation. This also underlies the announcements by the economic authorities seeking the fiscal balance with limits on the incorporation of public employees and cuts in luxury spending in the public sector. A better management of the human resource and the elimination of superfluous expenses are pertinent, but relying only on these measures is to continue trying to hide the seriousness of the public finance disorders. Even assuming that the announced U$S 800 million saving is obtained with these measures, they represent less than 5% of the total fiscal deficit.

Much of the expansion of public spending is generated by the pension system and federal programs executed by national officials unduly co-managing services that are in charge of the provinces and municipalities. Therefore the energies should be focused on addressing this disorder. With a vision in this direction, the ordering of the state would be more efficient and socially and politically more tolerable.

The right way is to replicate the experience of the Fiscal Consensus that after a laborious process of searching for coincidences allowed reaching good agreements. This is the method used by the countries that prosper, including close experiences such as Uruguay and Chile. For this, it is necessary more political maturity and less opportunism in order to agree on strategies coherent with economic and social progress.