﻿ The agreement with the European Union is an opportunity - IDESA ﻿

The agreement with the European Union is an opportunity

The agreement with the European Union is far from being a threat. Instead of delaying its approval in Congress, the best strategy is to focus on competitiveness improvements. The risk for Argentina is to postpone needed economic reforms while neighboring countries advance in the implementation of free trade. The agreement between the European Union and […] 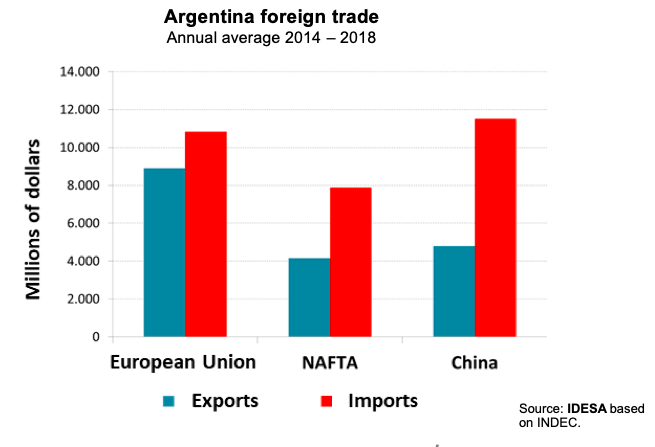 The agreement between the European Union and Mercosur causes mixed feelings. On the one hand, some see an unprecedented opportunity for prosperity being able to access the largest and with higher wages market in the world. On the other hand, detractors highlight the threat to the local industry, the possible disappearance of many SMEs and the risk of returning to a more primary economy.

In simplified terms, the agreement establishes that trade between the European Union and Mercosur will be liberalized within 10 years. For some sensitive products, this period may be extended to 15 years. One of the most controversial points is that Mercosur’s industrial sectors –such as cars, auto parts, machinery, chemicals and pharmacy– must be liberalized while certain agribusiness products where Mercosur is competitive –such as beef, pork and chicken, sugar, ethanol, rice, corn, honey and dairy– will have quotas.

Is the agreement convenient for Argentina? One way to shed some light on the answers is to analyze the commerce of Argentina with the three most important commercial blocks of the planet during the period 2014 – 2018. According to INDEC it is observed that:

These data show that the commercial block that generated the best opportunities for Argentina in recent years is the European Union. It is the area where most exports have been sent and with a more balanced international trade. This suggests that the reduction of tariffs and other obstacles to trade with the European Union is, among the available alternatives, the one that offers the best opportunities to Argentina.

However, the good results are not guaranteed. Liberalization creates a friendly environment to investments, exports and, with it, prosperity. But to achieve it, competitiveness improvements are essential. The starting point is macroeconomic and institutional reforms to normalize the economy. Commercial integration with high inflation, high interest rates and a dysfunctional public sector is of high risk. In the sectorial side, the strategy should not aim to defend threatened industries but to promote them to engage in the value chains of European companies. In the case of the industrial sectors now protected by the Mercosur (cars, auto parts, machinery, chemicals, pharmacy), they should be planning to be part of the value chains of their parent companies which are mostly European.

The worst strategy is to delay the agreement approval in Congress. The reason is that, once the European Parliament approves the agreement, any Mercosur country can move forward independently. That is, this country’s market will be opened immediately without being conditioned to the rest of the Mercosur´s countries approval. In other words, if Argentina delays its approval, but Uruguay, Brazil or Paraguay approve it, the protection that Mercosur currently provides will be in fact broken. New investments will be received by the first movers and the imported goods from the European Union will enter Mercosur through them.

The liberalization of international trade is an opportunity. To reduce risks, the strategy is not to pressure Congress to delay its approval but to demand measures to order the public sector. In this regard, the main challenges are to balance public finances, simplify the tax system and generate a favorable institutional framework for investment and jobs creation.