The coparticipation regime is reformed with no transparency

The government proposed to reduce the federal tax co-participation to the City of Buenos Aires and to re-establish national subsidies in that jurisdiction. This contradiction is the consequence of keeping on postponing a transparent debate on the co-participation regime to give equity and efficiency to federalism.     The national government recently announced that it would […] 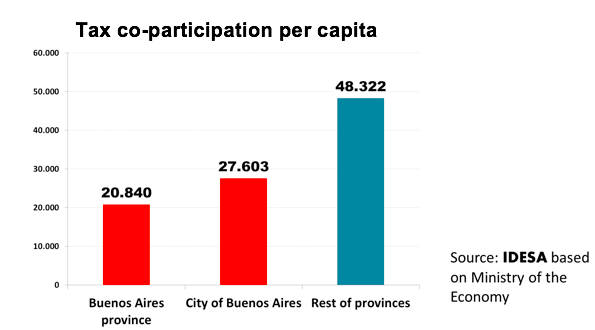 The national government recently announced that it would take back public resources that the previous administration had given to the Autonomous City of Buenos Aires. The former justification for having ceded those resources to the City was the transfer of the Federal Police to the City. The current justification for taking back these resources is that the City of Buenos Aires already has many resources per inhabitant. At the same time, and in spite of being the district with more resources, the national government decided to reverse another policy of the previous government. It re-established the national subsidies in favor of the metropolitan area.

This tangle happens because it is alleged impossible to discuss a new co-participation regime. The Constitution established that a new scheme of co-participation should have been sanctioned in 1996. A quarter of a century has past, and the mandate is unaccomplished. But the most damaging point is that the co-participation is modified through an opaque, discretionary and arbitrary manner without respecting the institutional channels (which would mean debate and sanction of law in Congress).

These data show the disorder of the co-participation regime. The province of Buenos Aires receives less than half as much per capita as the rest of the provinces. The city of Buenos Aires, which would now be affected by the take-back by the federal government, also receives less than the rest. But among the rest of the provinces, there are also many arbitrary cases. For example, Cordoba, Santa Fe and Mendoza receive about U$S 467 per capita, while Santa Cruz receives U$S 880 and Tierra del Fuego U$S 1,440. Provinces with a similar level of underdevelopment, such as Jujuy and Formosa, receive U$S 733 and USS$ 1,200 thousand, respectively.

The arbitrary distribution of co-participation is only part of the awry federalism. The other source of inequity and inefficiency is how the national budget is allocated. For example, although the city of Buenos Aires receives relatively little co-participation, it is the one that benefits the most from national public spending. The federal government pays the City of Buenos Aires for Justice, security (with the National Gendarmerie and Prefecture), infrastructure works (water, sewage and streets) and the subsidy to public transport (trains and buses). Furthermore, the recently Solidarity Law reversed the measure of the previous government, which had eliminated national subsidies for electricity, gas and water in the City of Buenos Aires, and added one more benefit for the City.

The interrelationship between federal and provincial governments is plagued by hypocrisy and opportunism. On the one hand, the task to reform the co-participation, which is established by the Constitution, seems impossible. On the other hand, without debate and transparency, federal decisions are made redistributing enormous quantities of resources among jurisdictions. This generates political returns for those in power in the federal government but produces considerable social and economic costs. The public sector disorder stems from this perverse way in which federalism is administered.

A new regime should respect three principles. The first is that each jurisdiction should receive the taxes that its inhabitants pay. The second is that there should be an inter-provincial fund where the richer provinces subsidize explicitly to the poorer ones to compensate for regional asymmetries. The third principle is that national public funds cannot be used to give “aid” to the provinces to carry out their functions; they have already received their own resources and compensation for their asymmetries from the inter-provincial fund.