﻿ The currency crisis could have been avoided - IDESA ﻿

The currency crisis could have been avoided

After the surprising primary election results, the Central Bank did not stop the peso depreciation even though it was in better conditions to do it than in the 2018 crisis. With the dollar stampede, the government tried to compensate by reducing taxes and increasing social spending, adding up more uncertainty to a fragile situation. The […] 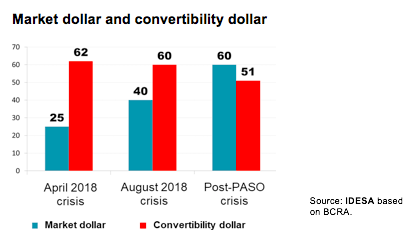 The adverse result for the government in the primaries triggered the dollar up from $ 45 to $ 60, accelerating the inflation rate. To compensate, the government adopted a battery of measures. These are to increase the minimum non-taxable of the Income Tax, reduce personal social contributions, suspend of the monotributo payment, freeze the price of gasoline, reduce to 0% in food VAT and add tax facilities for SMEs. Simultaneously, in the same logic of trying to compensate for the social impact of the newly spiking inflation, the government increased the monthly payments of welfare programs.

The improvised and risky reaction raised doubt and controversy about whether the exchange rate crisis was inevitable. In addressing this issue, it could be useful to take a benchmark such as the so-called “convertibility dollar”. That is to say, the ratio between cash in pesos held by the people, plus bank accounts nominated in pesos, plus Central Bank’s notes (LEBAC) , finally divided by all dollars held as the Central Bank’s reserves. It is an approximation to the value at which the exchange rate would be were all the pesos in the market to be used for buying dollars. This situation being a hypothetical extreme case, allows measuring how solidly the Central Bank is to defend the value of the peso in case of a run against it.

In this sense, according to data published regularly by the Central Bank, it is observed that:

These data suggest that the last exchange rate crisis was avoidable. The convertibility dollar is indeed a relative indicator, because, for example, not all reserves are available to deal with an exchange rate crisis. But compared to the exchange rate rises of 2018, the Central Bank was in much better condition to defend the value of the peso. Three factors explain this greater strength. First, the value of the peso was not appreciated. Second, the fiscal balance was more equilibrated. And third, the Central Bank’s notes (LEBAC), the main trigger for the exchange rate crises of 2018, were deactivated. All these made the convertibility dollar lower.

Another relevant fact is that the agreement with the IMF contemplated the possibility of intervening in the dollar market. The agreement stipulated a non-intervention zone between a floor of $39.75 and a ceiling of $51.45. It also establishes that, when the dollar reaches the ceiling (that is, it tends to exceed $51.45), the Central Bank has to intervene to defend that value. Although it also stipulates that the interventions must be in the order of US $250 million per day, larger sums were authorized under special situations. There is no doubt that the primaries results were such an extraordinary situation that justified a more aggressive Central Bank’s intervention to defend the value of the peso. Especially when the subsequent measures taken by the government, to mitigate the consequences of the currency crisis, violated not only the agreement with the IMF but also, and more importantly, essential parts of its own economic plan.

The unexpected result of the primaries deepened the political uncertainty in an already highly vulnerable economic, and social context. But this does not justified an improvised reaction that implied abandoning the government’s economic plan and the agreement with the IMF. The two pillars of the strategy to overcome the crisis were the exchange rate stability and the public finances balance. Both are now demolished.

The result is a worsened situation. More serious yet is that a substantive contradiction persists: a society that sees with sympathy a large public sector, but refuses to pay the taxes demanded to finance an enlarged public sector. As long as the dream of a large free-of-cost public sector remains, crises caused by excess in monetary printing as well as public debt are meant to be recurrent. This will happen regardless of who either the president or the minister of the economy may be.