﻿ The festival is about printing pesos, not of imports - IDESA

The festival is about printing pesos, not of imports

The Minister of Economy resigned in the context of a strong exchange rate instability. The Vice-President blames it on the “festival of imports”. The evidence shows that there is no excess of imports, but an excess of monetary emission due to the disorder of the State. This is what puts pressure on the dollar. 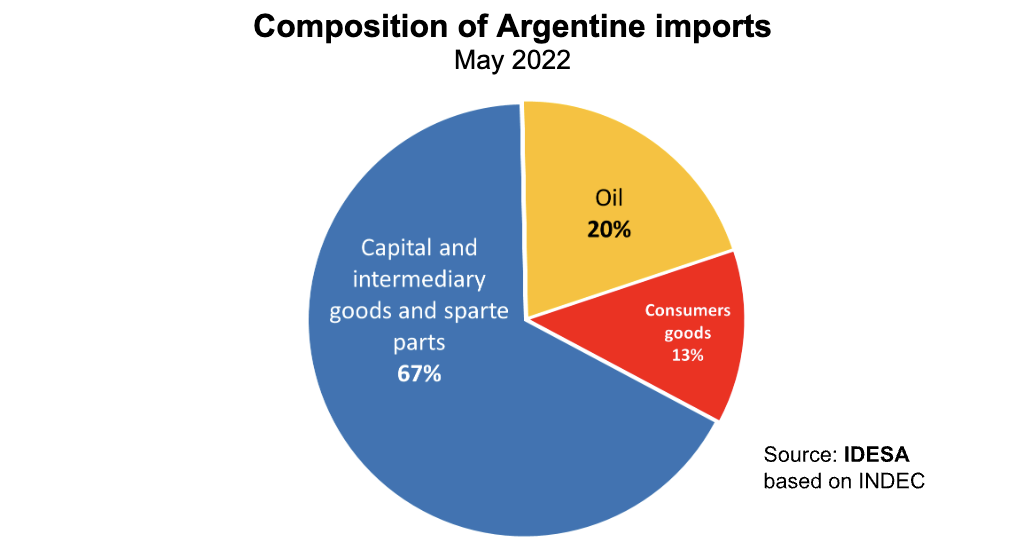 The Vice-President of the Nation denounced that the government was allowing a “festival of imports”. In her argument, she considers that this is the main factor that explains the instability of the exchange rate and the precarious situation of reserves in the Central Bank. Consistent with these ideas, the economic authorities decided to intensify the “cepo” (restrictions to buy dollars), increasing the obstacles for companies to access official dollars. The situation seems to have finally tired the Minister of Economy, who decided to resign.

Foreign trade statistics show that in May imports amounted to USD 7,870 million. This is the highest monthly value observed in the series published by the Ministry of Economy since 1992. The same source shows that exports in May were USD 8,226 million. This amount is just 2% lower than the value of May 2013 which was the maximum in the series of the Ministry of Economy. Evidence suggests that there is an effervescence of foreign trade associated with high international prices rather than domestic factors.

A more conducive assessment arises by looking at the composition of imports. According to INDEC data, foreign purchases in May 2022 were distributed as follows:

These data show that practically 9 out of every 10 dollars of imports are inputs for local production. This leads to discarding the idea that there is a “festival of imports ” associated with a massive inflow of consumer goods that compete with domestic production. On the contrary, most imports are essential to produce Argentine goods. The main consequence is that by placing more restrictions, the possibilities of domestic growth are diminished.

Paul Krugman, the winner of the 2008 Nobel Prize in Economics and adherent to heterodox theories, argues that the importance of exports is not in the accumulation of reserves but in the possibility of multiplying imports. With more imports, the economy can accelerate its growth because it has the possibility of having the best technologies available in the world and people have more welfare because they can have access to the best quality products in the world. Imports in Argentina are very low (13% of GDP), a level much lower than in advanced countries and a factor that conspires against economic development.

The problem is not that there are many imports but that there is a disorderly State. More than half a century of permanent fiscal deficit has led to excessive indebtedness and monetary printing. The excess of pesos and public debt is channeled towards the demand for dollars, generating exchange instability and loss of reserves in the Central Bank. In other words, it is not the “festival of imports” but the “festival of peso and debt issuance” to finance the deficit that drives up the dollar.

The international context is very convulsed. The most dramatic situation is being suffered by Ukraine as the epicenter of the war. But Russia is also suffering due to the war and sanctions. Europe is facing an energy crisis whose most severe manifestation will be in the winter with high energy costs as a result of the sanctions applied to Russia. Asian and African countries are suffering harshly from rising food prices. However, this international context is very favorable for Argentina, which sells food and could sell energy. But chronic fiscal deficits and lousy public management make the present worse than the one suffered by the rest of the world. The consequences of the disorder of the State are so negative that they even explain the paradox of the Minister of Economy resigning at a time when international prices of Argentine products are unprecedentedly favorable.