﻿ The important issues were avoided during the primaries - IDESA

The important issues were avoided during the primaries

The growing people’s refusal to accept more money expansion forces to increase the fiscal deficit financing through more public debt. This generates an unsustainable trend that increases the urgency of addressing an integral public sector ordering. However, the issue is not on the political agenda yet. 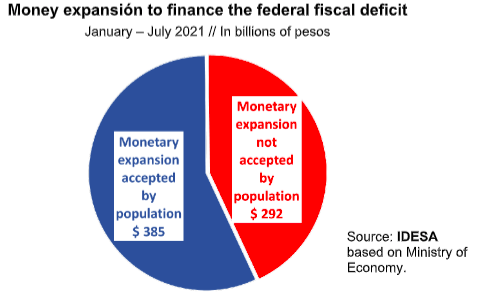 The electoral campaign was extremely anodyne. The main focus was on cross accusations, not only between the ruling party and the opposition but also within the internal parties. The verbiage on superfluous issues, inconsistencies, verbal stumbles, and ridicule prevailed. It seems that the pessimism, uneasiness, and resignation prevailing in a large part of society, instead of promoting good practice in the political system, encouraged mediocrity.

The campaign suggests that it is not electorally profitable to address central and urgent issues. Particularly relevant is the public sector’s poor organization and malfunctioning. This would explain the conservative attitude to avoid talking about State modernization and public management innovation. Underlying is the idea that the deep economic and social crisis will be overcome with some providential political leadership.

This political recklessness takes place in the context of growing tension in the federal public finances. According to data from the Ministry of Economy, between January and July 2021, all public debt capital amortizations were covered with new debt. Additionally, the fiscal deficit had to be financed as follows:

These data show the growing difficulties to finance the fiscal deficit. A little less than half of the deficit was covered with money printing not accepted by the population, forcing the Central Bank to rescue it with Leliqs. The stock of this debt reached $4 trillion with an interest burden of $800 billion so far in 2021. People not only expressed apathy and rejection in the electoral campaign, but also reject the monetary expansion needed to finance the fiscal imbalance.

Among the multiple electoral campaign cross accusations, one referred to who indebted the country more. In this argument, there is a tendency to avoid a key issue, which is that the public debt is part of the fiscal deficit that could not be financed with monetary expansion. Since people set limits to their propensity to hold pesos, public debt increases. This exacerbates imbalances because it increases the interest to be paid on that debt. In this context, an agreement with the IMF is just a necessary condition. But it is far to be the way out of the economic crisis.

The sufficient condition –which was not mentioned during the electoral campaign– is a public sector comprehensive reorganization. It is not only a matter of putting an end to the chronic fiscal imbalance, but it is also necessary to substantially improve public management. The challenges are big because they require innovation and leadership to eliminate tax and expenditure overlaps among the three levels of government. At the federal level, overlapped structures with provincial and municipal functions must be dismantled. The federal government should focus on measuring and making transparent the provinces and municipalities results in the provision of public goods. Simultaneously, co-participation must be eliminated to redistribute tax competencies among jurisdictions, so that each level of government is financed by its own taxes. For the north of the country, a Convergence Fund must be created to encourage their development.