﻿ The international prices boom is not enough for Argentina - IDESA

The international prices boom is not enough for Argentina

Historically, the Argentine economy is very sensitive to the international context. However, the economic disaster caused by the fiscal disorder is so deep that the current bonanza is not enough to reverse the decay. Another demonstration that the state’s reordering is urgent and inevitable. 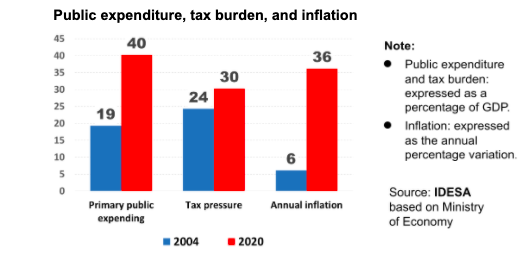 The near-zero interest rates in international markets and the increase in the price of raw materials pose a very favorable context for Argentina. Given that the cycles of the Argentine economy are closely linked to international cycles, the situation supports favorable expectations. With the price of soybean exceeding U$S 500 per ton, the hope of approaching a similar process to the one that took place between 2004 and 2012 with a GDP growth of 60%, the creation of 2 million new salaried jobs registered in private companies, and the increase of the salary from U$S 400 to U$S 1,400 at current prices is nourished.

Besides the international bonanza, what boosted the 2004 dynamism in production and employment was also the very low level of real wages. An average salary of around US$ 400 in 2004 was an atypical situation derived from the traumatic Convertibility Law exit. Currently, it is around US$ 600, a half higher but still a relatively low value compared to the historical average. This shows that labor costs are also “competitive”.

Are high soybean prices and low wages enough to replicate a cycle similar to the one started in 2004? Data from the Ministry of Economy can help to answer this question. Based on the official source, it can be seen that:

These data show that conditions in 2004 were very different from today. In 2004, public expenditure, tax burden, and inflation were much lower. Since then, the accelerated growth of public spending led to a tax burden increase that is today highly resisted by the population. The consequence is that the government is forced to finance its deficits by issuing money. This is the main reason why inflation is 6 times higher than in 2004. Furthermore, other factors also count such as enough energy investments in 2004 to sustain the economic expansion, while today there is an energy deficit.

Expectations should not favor that an international bonanza as that of 2004 would generate the same results today. The reason is the impressive expansion of public spending without strategic judgement or financial support. A soybean-ton at U$S 500 is not enough to compensate a huge and poorly managed public sector. For example, due to the exchange rate gap (official exchange rate at $88 per dollar when the market exchange rate is $150) the U$S 500 that a soybean ton is worth in the international market are transformed into U$S 300 for the producer. On this amount, further cuts are applied by export tariffs.

It is very good news that the international context is favorable. But the economic disorder is such that the bonanza is not enough to drive growth in production and employment. If the boom is assumed with a passive attitude, in the best of cases, it will serve to moderate the decline. On the other hand, if it is accompanied by an active attitude, ordering the state at its three levels, it may be a good starting point to promote economic growth. That is to say, not only to recover the ground lost with the pandemic but also to aspire to catch up with neighboring countries, such as Chile and Uruguay, which surpassed Argentina in GDP per capita. In order to achieve this, the reorganization has to include tax, pension, federalism and administrative reforms.

There are no magic solutions. The price of soybeans, Vaca Muerta or the IMF’s understanding to reach an agreement are no substitute for the challenging and politically complex task of reorganizing the state. The longer it is postponed, the deeper the decline will be, and the less relief the international bonanza, Vaca Muerta, or a good agreement with the IMF will generate.