As expected, the quarantine produced an abrupt drop in economic activity. The labor policy could not avoid the negative impact on employment and concentrated the job destruction on self-employment and informality. The impact on vulnerable sectors was strong, which explains the high increase in poverty. 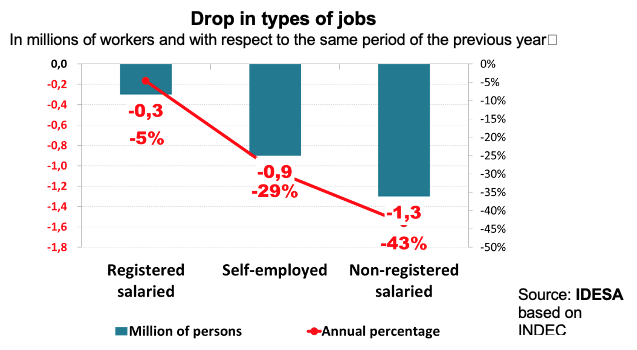 In the second quarter of 2020, a period in which the lockdown was the most rigid, Argentina’s Gross Domestic Product (GDP) contracted by -19% compared to the previous year’s same period. The strategy was to prioritize health over the economy. At present, Argentina reports 700 thousand infected and 15 thousand dead. In Uruguay, without mandatory lockdown, but citizen responsibility and scientific methods for efficient testing, the GDP fell by almost half (-11%) and reports only 2,000 infected and 47 deaths.

On March 15th, when the idea of a rigid and extreme lockdown was discussed, IDESA warned that it would cause enormous social damage (https://idesa.org/el-45-de-las-familias-viven-de-la-informalidad/). The reason is that in the Argentine labor market, only half of the employed are registered salaried workers with an employer who can maintain their salary. The other half comprises self-employed and unregistered salaried workers who would be left without incomes immediately after the lockdown starts.

Recent official information on the labor market in the second quarter of 2020 allows evaluating this warning. According to INDEC, total employment fell by -21%, a destruction of 2.5 million jobs. The fall is composed as follows:

These data confirm the enormous social costs that the tight lockdown produced. IDESA’s prediction was not complicated. It was based on common sense applied to the official information. If self-employed and informal workers depend decisively on the economic activity and half of the labor market is made up of this type of employment, it was natural that the stop in the economy would cause a drop in employment and income that no state aid could compensate for.

From the health point of view, strict confinement served to postpone infections and deaths. But the growing saturation of the population, together with the absence of an efficient mass testing strategy, led to the multiplication of infections and deaths. From the labor point of view, in the formal sector, the strategy of prohibiting layoffs and subsidizing companies served to contain layoffs. However, the majority of private companies are financially hard hit. Therefore, it is foreseeable that, just as contagion multiplied when the population was liberated, firings will occur when the prohibition and subsidies end.

Another negative aspect of the rigid lockdown was its regressive impact on income distribution. The Gini Coefficient (which measures inequality) went from 0.434 to 0.451 in the second quarter of 2020. This effect is explained by the abrupt fall in GDP and the fact that the public policies distributed the costs of lockdown very unequally. Public employees, in general, maintained their employment and salaries. Formal private employees had job losses and reductions in wages but at limited levels. The adjustment was concentrated among the self-employed and the informal workers, the most vulnerable population segments. The INDEC’s inequality data confirm that the state program Emergency Family Income (IFE) did not prevent the poor from bearing the burden of the confinement sacrifice.

With more scientific support and a comprehensive vision, a less costly and regressive strategy could have been deployed to address the pandemic. But the responsibilities are also shared by all previous governments that had encouraged a dual labor market for decades. By maintaining archaic labor legislation, they contributed to the labor and social vulnerability of half the population.