The packaging law violates the constitution

The packaging bill creates a new tax to fund the National Ministry of Environment allegedly for waste management. This centralization is very inefficient from a management point of view. But its major shortcoming is that it violates the Constitution, which assigns this function to the provinces and municipalities. 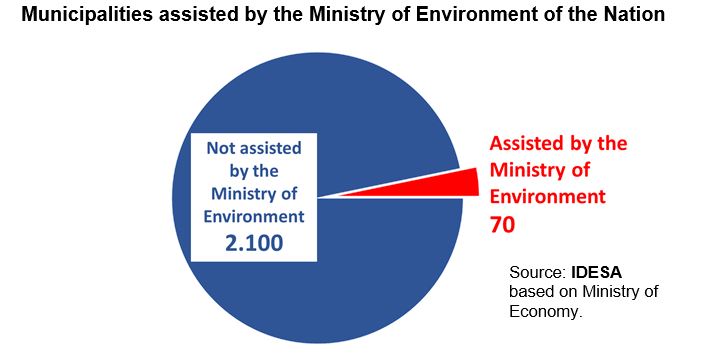 Waste management in each city or town is a municipal responsibility. It includes sweeping, cleaning, collection, recycling and disposal of waste. In order to preserve the environment, each municipality must modernize its waste management systems promoting reduction, reuse, and recycling mechanisms.

However, the national government proposes to pass a law creating a National Fund for Packaging Management and Inclusive Recycling (FONAGER) to be financed by an Extended Producer Responsibility Environmental Fee (TAREP) managed by the national Ministry of Environment. The fee will be set per kilo of packaging and will not exceed 3% of the price of the packaged product. The Ministry of the Environment will be the coordinator of the Local Integrated Packaging Management Systems throughout the national territory. The members of this system will be the municipalities and recycling workers’ organizations.

What are the possibilities for a national organization to manage waste efficiently throughout all the municipalities spread throughout the country? To answer this question, some official data may be useful. According to the Ministry of Economy, it is observed that:

These data show that the proposal to manage waste in all of the country’s municipalities from a national Ministry is far-fetched. The marginal reach that the National Ministry of Environment currently has in the municipalities is logical and foreseeable. It is impossible to manage from an office in the Capital all the municipalities of the country. But the most serious thing is that the project proposes the creation of a new tax so that the national government can arrogate to itself local functions that are expressly forbidden by the National Constitution. Article 5 of the Constitution leaves no doubt when it establishes that “Each province shall dictate for itself a Constitution … that ensures its municipal regime…”. In this sense, the project is in open violation of the Constitution.

The advance of federal interventions on provincial and municipal functions is not original. It is the logic that inspires the national Ministries of Education, Health, Social Development, and Habitat. The same Article 5 of the Constitution, which prohibits federal interventions in the municipal organization, also states that basic education is the responsibility of the provinces. However, the federal Ministry of Education is dedicated to “help” provincial schools with national programs. All the provinces in their Constitutions establish that they will be responsible for public health. But the federal Ministry of Health “helps” provincial and municipal health centers and public hospitals with national programs. The same happens with the Ministry of Social Development assisting vulnerable populations and the Ministry of Habitat doing some houses in some cities.

The national government’s appropriation of taxes to invade provincial and municipal responsibilities is one of the causes of Argentina’s decadence. This action increases the fiscal deficit and, fundamentally, lowers the quality of public management. The reason is that it dilutes the responsibilities of local authorities in the failures and contaminates the political system through the discretional distribution of these “aids”.

This background should not be ignored in the instance of addressing a strategic issue such as environmental care through efficient management. Congress has the opportunity to redirect the issue by rejecting the idea of creating another tax to centralize provincial and municipal functions in the federal government. In addition to being extremely inefficient, it violates the Constitution.