﻿ The percentage of families who own their home has decreased - IDESA

The percentage of families who own their home has decreased

Behind the squatting wave are spurious motivations linked to illegal property grabs and clientelism. But the breeding ground is undoubtedly the difficult access to homeownership. This is the result of chronic inflation, which prevents mortgage credit, and the complete failure of public housing policies. 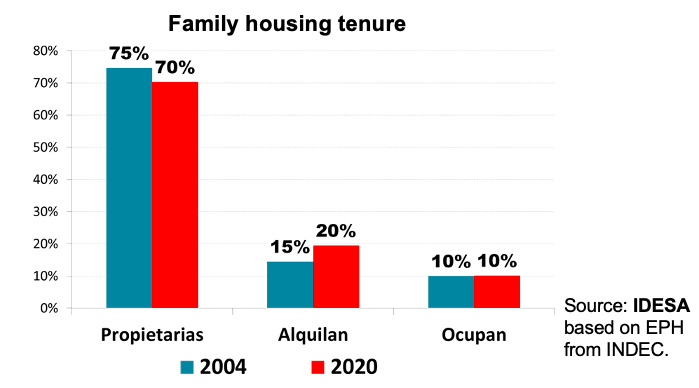 So far in 2020, there is a worrying trend towards grabbing land by force in flagrant property rights violations. The phenomenon has different nuances. In the south of the country, land takeovers are being raised as part of the claims of ancestral indigenous populations. There are many well-founded suspicions that behind the ancestral argument lay real estate business interests and political-partisan motivations. Evidence is the active participation of political leaders, even using the state apparatus. Furthermore, many of the takeovers involve large land areas with high real estate value due to its privileged location in the midst of natural beauty.

The case is different in the Conurbano of Buenos Aires, where those who take over the land are poor families looking for a small plot of land that is not even suitable for housing. This squatting is explicitly promoted by social movements that take advantage of the temporary ban on evictions declared by the pandemic. The disorder is fuelled by judicial inefficiency that does not enforce the basic and natural principle that the prohibition on evictions does not apply to illegal property possession.

Understanding these phenomena may require to analyze the situation of housing tenure in the urban population of Argentina. According to data from the INDEC, it can be seen that:

These data show that the difficulties in accessing homeownership have been longstanding. So far in this century, the families renting housing are the ones that have grown the most, followed by those occupying it. The difficulty of access to homeownership is a structural problem that creates the conditions for organizing illegal occupations in a context of accelerated impoverishment.

In well-organized countries, homeownership’s natural route is through long-term mortgage loans (30 / 35 years). Under these terms, housing is accessible to most people because the installment values are reasonable. There is also access to housing with state-subsidized loans to adapt the installment to the lower payment capacity for very low-income families. In Argentina, by contrast, the long-term mortgage market does not exist because of chronic inflation. This is a highly regressive factor as access to housing ends up being a privilege of higher-income families.

The second factor preventing access to homeownership is the deplorable social housing policies. On the one hand, the national state –which has no competence in housing, as it is a provincial and municipal jurisdiction– has historically implemented programs with much demagogy and low efficiency. An extreme example is the recently created a national ministry of housing with the goal of building 21,000 houses. This federal ministry would cover only 0.5% of the housing deficit if it were successful. For decades, the provinces responsible for the housing policy have received part of the fuel tax channeled through the National Housing Fund (FONAVI). But a significant portion of these funds goes to bureaucracy and corruption.

Moreover, because the design and administration are so rudimentary, the few families who benefit from it (generally chosen arbitrarily) do not repay the loan. Therefore fewer houses are built than could be. The problem is reinforced by bureaucratic obstacles to urban infrastructure development and the registration of property ownership.

Access to homeownership has a high impact on the quality of life. Therefore, a macroeconomic policy to develop a long-term mortgage market and better designed and executed housing policies is a powerful social inclusion tool. The failure on these issues means to fuel the proliferation of squatter crimes.