﻿ The quantity of money increased by 35% above inflation - IDESA

The quantity of money increased by 35% above inflation

Monetary expansion to finance the fiscal deficit in 2020 caused money held by the people to rise well above inflation. With the economy in decline, this generates strong inflationary pressures. In this context, price and wage agreements are merely good intentions, if the public sector is not reformed comprehensively. 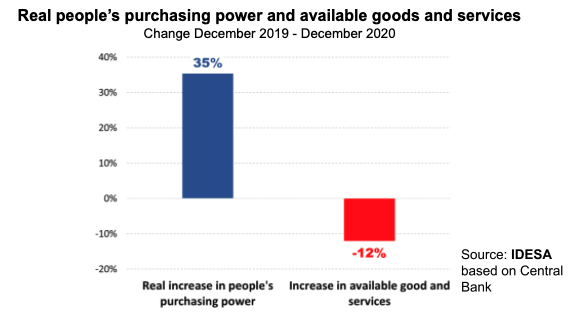 2020 ended with an inflation rate of 36%. This is a significant decrease from 2019, when inflation was 54%. The decline has to be assessed in the atypical context posed by the pandemic and the lockdown. In April 2020, when the tightest confinement, inflation was in the order of 1.5% monthly. But as the lockdown was relaxed, inflation rose to 4 per cent monthly in December.

The enforced isolation altered the dynamics of prices and the economy. Consumption began to recover after a sharp decline in April. Inflation followed the same trend. Towards the end of the year, prices rose at a similar pace to that recorded before the confinement. Furthermore, they are expected to rise further in January, causing concern in society. It also explains the priority that the national authorities give to price and wage agreements.

What can be expected for inflation in 2021? A projection can be drawn by looking at data from the Central Bank. According to this official source, between December 2019 and December 2020 it is observed that:

These data show that today people have 35% more purchasing power than at the beginning of the year. However, the Gross Domestic Product (GDP), which is the total amount of goods and services available for purchase, contracted by -12% in 2020. More money in people’s hands and less supply of goods and services creates an imbalance that keeps a strong pressure on prices. This suggests that inflation will continue to rise in 2021.

The recovery of the economy will indeed tend to correct the imbalance. But the orders of magnitude differ greatly. While the people’s real money increased by 35%, the government projects that GDP will grow by 5.5% in 2021, 4.5% in 2022 and 3.5% in 2023. This represents cumulative growth of 14%. In other words, in 2023, the quantity of goods and services available will be equal to 2019. In the meantime, the fiscal deficit will continue to force monetary emission, thus increasing the quantity of money held by the people.

The national authorities resort to several measures in trying to contain inflation. The Central Bank is absorbing part of the money issued with Leliqs and swaps operations, which forces it to pay high-interest rates. The same happens with the Treasury, which issues bonds tied to the dollar with high-interest rates to lose pressure on the Central Bank. The freezing of tariffs also contains price increases but at the cost of increasing subsidies. In other words, all the instruments used by the government tend to generate more monetary emission in the future. In this framework, price and wage agreements can help contain inflationary pressures, but only temporarily. A clear example is the recent wage agreement celebrated by the banking sector’s union. It negotiated an increase of around 30%, in line with official inflation projections, but with a review clause if inflation ends up higher. In other words, not even a pro-government union, such as the banking sector’s one, believe in the official target.

Inflation is a multi-causal phenomenon, although not all factors are equally important. The fiscal deficit has a decisive impact in the current conditions, especially because of the public sector’s limited access to credit. Therefore, prioritization is key. That is, a comprehensive public sector reform is central to reduce fiscal deficit, and price and wage agreements are a complementary and secondary tool.