The more the soya-dollar increases reserves, the more monetary issuance there will be, consequently, more inflation. There is an underlying obsession with increasing reserves when efforts should be focused on lowering public spending. The problem is not a lack of dollars in the economy, but that there are too many pesos. 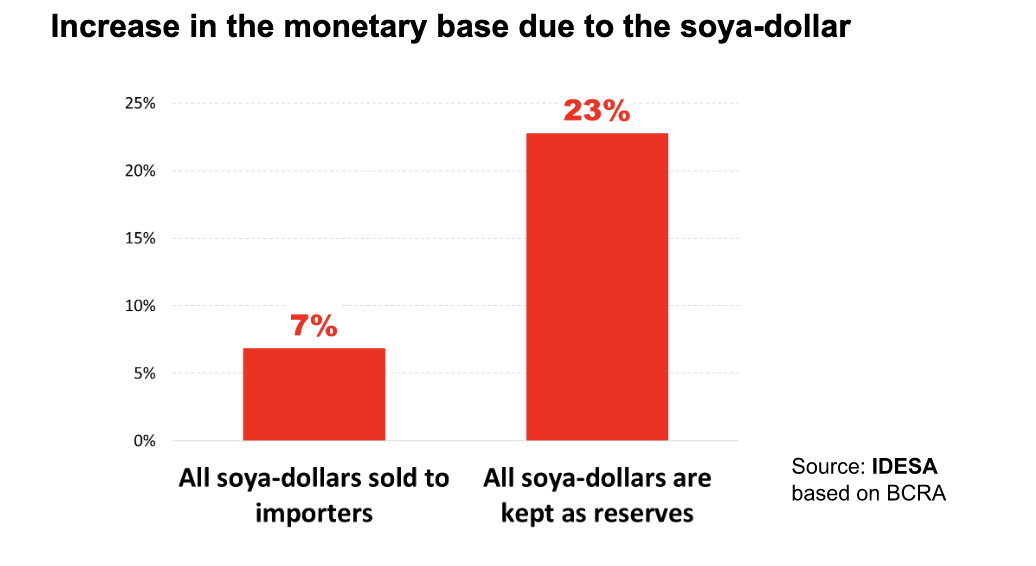 The government has made the accumulation of reserves a top priority. To this end, it implemented the so-called soya-dollar which consists of offering, only for September, $200 per dollar to soya producers. The official exchange rate is maintained at $140, thus generating a special benefit of $60 for the soya sector. It is expected that some US$ 5 billion will be settled through this mechanism.

A very important aspect is that the inflow of dollars to the Central Bank implies monetary issuance. The Central Bank issues pesos to buy dollars from exporters. If those dollars are sold to importers, the issuance is absorbed and would have no inflationary impact. But since it issues buying soya-dollars at $200 and sells them to importers at $140, there is a remaining issue of $60 per dollar obtained with soya-dollars. In other words, in the extreme, even if no reserves are accumulated because 100% of the soya-dollars are used to pay for imports, there will still be monetary issuance due to the $60 per dollar. This adds more inflation.

How much inflation does the soya-dollar add? To answer this question, the following scenarios are presented, assuming that the expected USD 5 billion is sold to the Central Bank:

These data show that the additional monetary issuance generated by the soya-dollar is of significant magnitude in a context where people no longer want to accept more pesos. The most paradoxical thing is that the more “successful” the government is in accumulating reserves with the soya-dollar, the more monetary emission it will dump into the market. The situation will force the Central Bank to absorb the remaining issuance by increasing the absorption of pesos with Leliqs. But this forces it to pay more interest, which is another source of monetary issuance. Currently, the Central Bank’s issuance of Leliqs interest is equivalent to 9 million minimum pensions per month.

The soya-dollar may generate a transitory improvement in the Central Bank’s reserves. But it does so at the cost of adding inflationary pressures and increasing the unstoppable snowball of Leliqs. In the short term, exchange rate tensions decrease, but social tensions increase due to higher inflation. Furthermore, this dynamic of issuance and growth of Leliqs makes a traumatic outcome through a mega-devaluation more probable. It is perplexing that the increase in the Central Bank’s reserves thanks to the soya-dollar is taken with enthusiasm, ignoring the fact that it is generating more monetary issuance, making the situation increasingly unsustainable.

The starting point is a misdiagnosis that leads to a wrong obsession. In view of the alarm generated by the fall of the reserves, the obsession to obtain dollars is set. With diligence and enthusiasm, the soya-dollar is established and functionaries travel to the United States to unblock loans withheld by international organizations. But the correct diagnosis is that there is not a lack of dollars in Argentina, but a surplus of pesos. As long as the issuance is not moderated, it is inevitable that the excess of pesos will put pressure on the Central Bank’s reserves.

The obsession should be placed on reducing public spending. Given that there is no margin to increase the tax burden and very few investors are willing to lend to the Argentine State, the only way to reduce excess emissions is to reduce public spending. This should be done with a comprehensive reorganization of the State instead of rudimentary orthodox adjustments. However, given the critical situation, it is urgent to reduce, at least, the inconsistencies in the management of public services tariffs and welfare programs.