﻿ The state spends more on economic subsidies than on salaries - IDESA

The state spends more on economic subsidies than on salaries

The FMI’s evaluation of the loans granted in 2018 motivated a heated exchange of accusations. But the most important conclusion is that the core of the problem is the persistence of unsustainable fiscal deficits. To correct them, the urgency is not to lower public wages spending but economic subsidies. 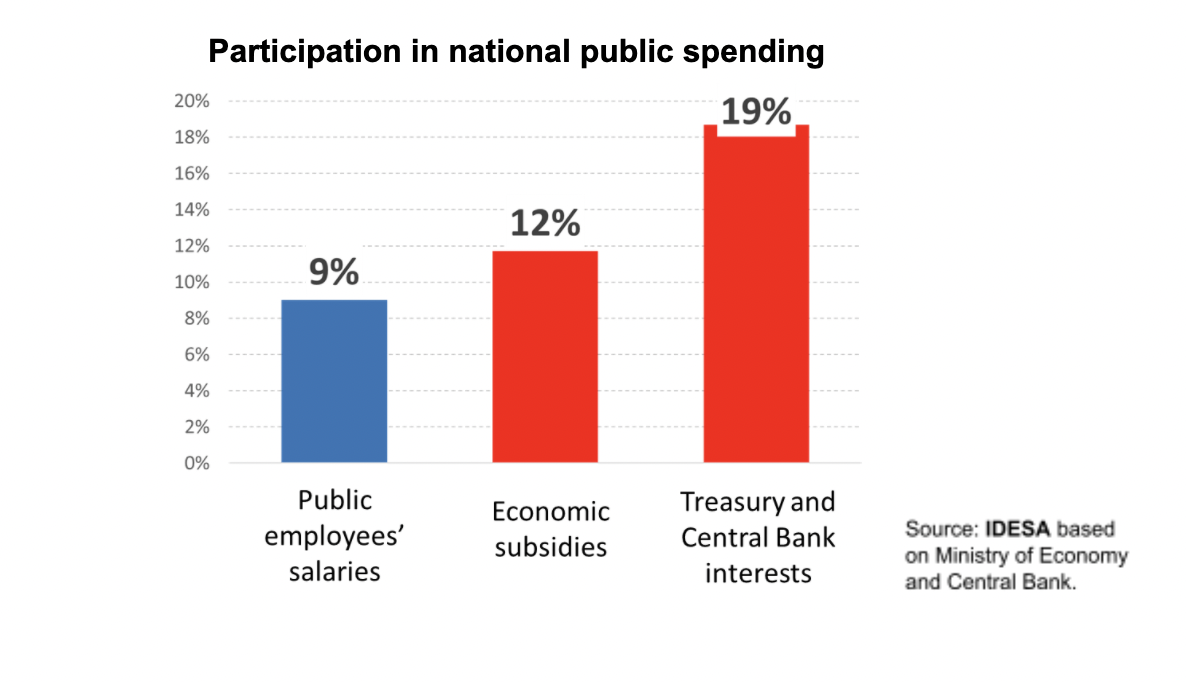 The International Monetary Fund (IMF) published an evaluation on the Stand By agreement granted in 2018 to the country. The document was used to deepen the cross accusations about the responsibilities in the crisis. A more objective reading leads to confirm that the main cause of Argentina’s long decline is the chronic fiscal deficit and that it transcends the differences among administrations. According to the Ministry of Economy, in the last 60 years, there was no fiscal deficit in only 6 years. But even in these 6 years, between 2003 and 2008, the surplus was achieved because the public accounting did not record as expenses the lawsuits generated by the lack of pensions inflation-adjustments and the interests on debt were not paid because the country was in default. Therefore, well-measured, it can be said that Argentina accumulates 6 decades of fiscal deficits.

This evidence leads to affirming that the most urgent need is to clean up the public finances. In this regard, it is often considered a priority to correct the employees oversizing in the public sector. But with the same emphasis, it is argued that this is impossible for political and social reasons so resignation about the fiscal deficit comes over.

The relevant question is whether personnel spending is indeed the most decisive determinant of the fiscal deficit. Taking data from the Ministry of Economy and the Central Bank and considering the interest paid by the Central Bank on its liabilities as part of the total national public expenditure, it can be seen that:

These data show that spending on salaries of public employees is less than what the federal government spends on subsidies for electricity, gas, and transportation. It also represents less than half of what the national government pays in interest on its debts. Clearly, the approach to balance the public finances is much more about economic subsidies and interest than about cuts in public employment.

This leads to emphasize that the most urgent and decisive factor to reduce the fiscal deficit is subsidies. Even if the utility adjustment is gradual and takes into account the situation of lower-income families, there is ample room to reduce economic subsidies. With fewer subsidies, the deficit can be reduced and, together with this, the possibility of paying less interest on the debt arises. Both the interest paid by the Central Bank for the Leliqs and repos, as well as the interest paid by the Treasury for the debt it issues to finance the deficit. After social spending, subsidies and interest are the two items that weigh most heavily on public spending and they are intertwined. The reduction in subsidies brings a reduction in interests.

In terms of public employment, the main challenge is not much to reduce the wage bill but to improve its productivity. There are indeed many areas of the State where there is redundant personnel, without relevant functions, high demotivation, and low levels of competence for public service. Correcting these deviations is very important, not so much because of the savings it may generate, but because it will allow increasing public management capacity. A modern and innovative approach to human resources administration within the State is a priority in the search for a more efficient public sector.

The argument that the fiscal deficit cannot be reduced because it is not feasible to correct the public employees’ oversize is false. The evidence shows that to begin correcting the public finances imbalance, it is much more urgent and pertinent to reduce utility subsidies. This will not only correct inequalities in favor of middle and high-income families concentrated in the metropolitan area, but also it will reduce the fiscal deficit. By reducing the fiscal deficit, the interest bill will also be reduced.