﻿ The worst is yet to come in terms of inflation - IDESA

The worst is yet to come in terms of inflation

The inflation rate remains at a very high level with very negative impacts on social costs. Inflation is intrinsic to the government’s economic policy. It will not be reversed without a change in strategy. In particular, public spending must be moderated to avoid massive monetary creation. 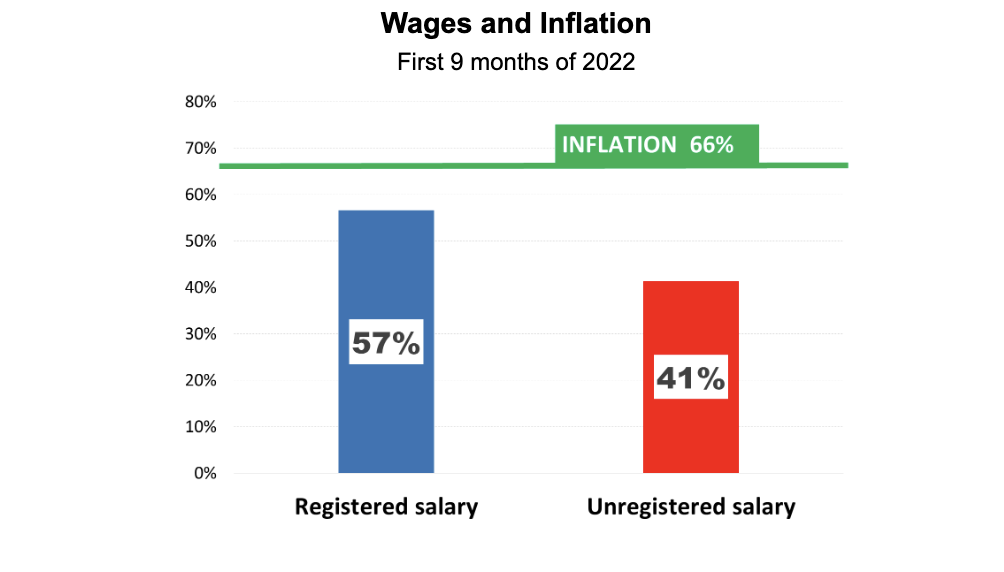 Inflation in September was 6.2% monthly. As prices grow at rates in the order of 6% have been observed since March, the projection for the whole year reaches 100% per annum. These price dynamics have an enormous negative impact on the functioning of the economy in general and, particularly, on the social situation.

In this context, it is not surprising that unions are making wage demands in the order of three digits. Paradigmatic cases are wage negotiations in the tire and truck sector. The other unions, according to their lobbying capacity, also adopt similar strategies. It is common to negotiate to bring to the present increases already agreed upon for the future and to establish periodic reviews in order to adjust salaries to price dynamics. The situation is very different for the huge proportion of informal workers. In this segment, with much less bargaining power, it is difficult for wages to keep pace with inflation.

With information published by the Ministry of Labor and INDEC, it is feasible to quantify the impact of inflation on workers’ income. Considering the first 9 months from 2022 it is projected that:

These data show that inflation has been producing a generalized deterioration in salaries. The phenomenon is important in the segment of formal workers, but it is much stronger among informal workers. It should be borne in mind that half of the employed in the labor market is informal, either as unregistered wage earners or as self-employed. This explains the growth of poverty since informal work is the main source of income for the most vulnerable families. This is not an exaggerated perception, but a reaction that responds to an objective situation, that inflation is the main concern of the population at present.

It is necessary to start from the diagnosis that inflation is intrinsic to the government’s economic policy. The national government has an excess of spending over its income that it cannot cover with debt raised voluntarily. This generates massive monetary creation which, since it is not demanded by the population, ends up putting pressure on prices. As the government perceives this rejection, it appeals to moderate the impact of money creation on prices by using the Central Bank’s Leliqs. With this instrument, it temporarily withdraws part of the excess of money.

Another decision taken to contain inflation is to overprice the real exchange rate. So far this year, the official dollar has increased only 50% when inflation is heading for 100%. This puts a lot of pressure on the Central Bank’s reserves. The foreign currencies obtained with the “soy dollar” have already evaporated, forcing new alchemies such as the “Qatar dollar” or the “Coldplay dollar”. With the same level of inconsistency is the decision to avoid the update of energy tariffs. The part of the energy costs not covered by tariffs is paid for with fiscal subsidies financed with monetary creation.

The fall in reserves due to the overpriced exchange rate, the increase in subsidies due to the outdated energy tariffs, and the increase in Leliq’s interest rates demonstrate the inconsistencies of the government’s policies. Therefore, there are no grounds to expect that the inflationary process will decrease in the coming months. On the contrary, with projections above three digits, the worst is yet to come. Particularly risky is the expansion of Leliqs, which are already equivalent to twice the monetary base.